UP 3985 made its way through Nebraska, Kansas, Missouri, Illinois, and back again to Nebraska, and I had the pleasure of accompanying it on its journey through the Heartland.

Due to other commitments I chose to start on September 30, 2010 at North Platte, although it began its journey in Cheyenne on September 28. I arrived in North Platte to see UP 3985 and its short train arrive at Bailey Yard. 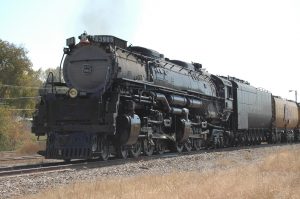 UP 3985 gleams in the autumn sun – Yard Goat Images Photo

It had been a few years since I had seen UP 3985, and it was great to see an old friend again. The big Challenger Class 4-6-6-4 was built for the UP in 1943 by American Locomotive Works, one of a total of 105 ordered, and the only operating survivor. Although the Challenger was not the largest steam engine ever built, it was the largest still operating in the world in 2010.

The crowds of people who stood along the tracks, or visited the engine during stops were both amazing and yet understandable. It is an all too rare event to see mainline steam, and rarer still to see the likes of this beast. Word gets out, and the local folks join the long distance chasers to revel in the noise and earth shaking as the train flies by.

The first full day of my journey with UP 3985 began on Friday, October 1 as the special departed North Platte for Marysville, KS, with a servicing stop at Kearney NE. Following the train on US 30 (the Lincoln Highway – my favorite Nebraska road) was magnificent, as I passed UP freights in both directions on the triple track. I found it difficult to get ahead as traffic slowed through the small towns which were born with the building of the first transcontinental railroad. If I could see the headlight in the rear view mirror, I knew there was not enough time to stop the car and set up my cameras. When no light could be seen in the mirror, I would start looking for a spot.

Then things got difficult. The route UP 3985 was taking to Marysville diverged from the triple line and headed southeast. There are few or no parallel roads, so as the train proceeded on a more direct route, I had to “stair step” south and east, with little chance of catching up.

The next day, Marysville, KS to to Kansas City, MO was similar in terms of the road vs. rail route. This day the train stopped in Topeka for servicing. All along the way there were people and vehicles gathered at grade crossings. At Kansas City, traffic was streaming into the lot behind the massive Union Station complex, where, the following day it stood on display with large crowds. 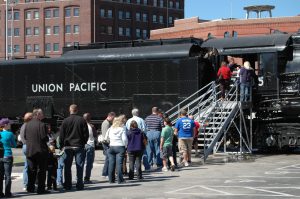 Next it was on to Jefferson City, the capitol of Missouri, with a service stop at Marshall. The special was on display in the shadow of the state capitol building the following day. I really enjoyed my stay in Jefferson City. If you ever get there, order the pulled pork sandwich at Bandana’s BBQ.

On October 6, the train made a short trip to St. Louis, with a whistle stop at Washington, MO. In St. Louis, UP 3985 was parked in a remote industrial section of town. Hard to find? Maybe, but the crowds sure showed up to climb the stair platform to peer into the large cab.

The following day was a difficult one as everything that could go wrong did. This was a roundtrip to Gorham, IL. I set up for my first shot along the Mississippi River not far from the Gateway Arch. The sun was nearly above the bridge but favorable to the side I chose. There was some sort of delay and the train did not appear as quickly as I expected. I was about to move to the opposite side of the bridge along with the sun, but then I heard 3985 approaching. Too late to move, I did my best but this shot did not make it into the program.

There was no service stop on the way to or from Gorham, and the roads and rail were not a good match again. Then, a MAJOR detour (sorry UP, but you picked the wrong day for making crossing improvements on Highway 3 between Chester and Rockwood) prevented most steam fans from reaching Gorham. The police officer directing traffic on a 16 mile detour said there was no way to make it there before the train turned around to head back to St. Louis. Oh well, that left time to find a good spot for the return trip. The other disaster of the day turned out that one of my two cameras had malfunctioned and I had lost some great scenes. Yikes!

After another day on display in St. Louis, the special headed west, this time to Sedalia, MO, with a whistle stop in Pacific, MO and servicing at Jefferson City. I was able to get some good footage in Jefferson City as the train made its stop in front of the Amtrak station at Jefferson Landing, where a large crowd had gathered. Next, I went west a few blocks to the UP yard to see the train roar out of town.

At Sedalia, UP 3985 was displayed for enthusiastic crowds until 6 PM the following day, when the train made a short and fast hop to Kansas City. This was the first evening move of the trip. The sun sets early in October, and a build up of clouds late in the day made for a pretty gloomy departure from town. I was on the west side of the city, perhaps a mile from where departure took place. By the time it reached my location, 3985 had the train flying. I caught one more shot along the way before complete darkness fell, then I proceeded to KC Union Station to watch it arrive, which was almost two hours earlier 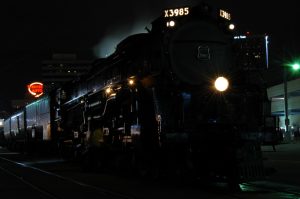 than scheduled. Again, a large crowd gathered ahead of time. The lighting around the parking area was bright so the video images were OK. Then I spent some time getting still photos lit only by the station area lights.

After another day on display (it rained for the first time), the train left Kansas City on Tuesday, 10/12/10, for Marysville, KS with servicing in Topeka. Happily, the rain had stopped by morning. This is the same route that was difficult going east, and it was equally difficult going west. Got some nice shots at Bonner Springs, departing Topeka, and arriving at Marysville.

My final day, Marysville to North Platte was again challenging on the way to the transcon connection. I didn’t even catch up at the servicing stop, but managed shots before North Platte as well as arrival there. (See a portion of the dramatic departure from Marysville here)

Sadly for me, again I had another commitment (a photo special weekend with Soo Line 1003 in Wisconsin) and could not spare the extra days to accompany UP 3985 on to Cheyenne.

The trip was a huge success in terms of capturing great video and still shots. I also met some very nice people along the way as I passed through the beautiful Heartland of our country.

I heap praise on Union Pacific for their fine steam program and for supporting the communities they serve. I was impressed by all the capacity improvements along the right-of-way in Nebraska since the last time I had been there. Even though we were going through a recession, I saw a LOT of trains.

We made a 50 minute video program of our trip with UP 3985. It’s the first of three chapters on our DVD Steam Specials in the Heartland.

It turned out that this would be 3985’s last trip, at least for the foreseeable future. Union Pacific surprised everyone in 2013 by announcing it would restore Big Boy 4014. The railroad has continued to operate 844 as 4014 is slowly being brought back to life at Cheyenne. Hopefully we’ll see UP continue to operate all three steam locomotives for years to come!

We’ve also made some minor editing changes to our documentary of 3985’s 2010 trip and included it on a new DVD, Union Pacific Steam – New-Century Journeys. This DVD includes two chapters featuring 844. 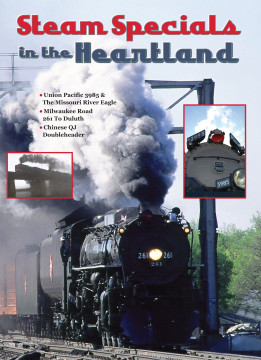 DVD – Steam Specials in the Heartland