Two trains are always better than one, right? In November, 2010, I enjoyed covering not one, but two trains. They were both long-distance steam excursions, involving two locomotives on two railroads with interesting connections to each other.

The Story of the Two Trains

The two trains intersected at Golden Spike Park in Council Bluffs, Iowa, a fitting place for things to intersect. The original Golden Spike, which we all learned about in elementary school, was ceremoniously driven into a railroad tie in Promontory, Utah when the first transcontinental railroad was completed at the spot where Central Pacific and Union Pacific track-laying met. Two trains, classic steam locomotives posed nose-to-nose, surrounded by workers, dignitaries, and the public as the historic spike was hit home, symbolizing the linking of east and west.

So why is there a Golden Spike Park in, of all places, Council Bluffs, Iowa? Well, Council Bluffs was the eastern terminus of the transcontinental railroad. It was where this new line across the prairies, mountains and deserts would join the established network of rails in the east.

The 56 foot tall spike that dominates a neighborhood park was originally part of a promotional event for the 1939 Cecil B. De Mille movie classic Union Pacific, which premiered at three Omaha theaters. How it became a fixture in the park in nearby Council Bluffs is probably another interesting story.

Back to the Two Trains

Let’s start with the second train first since it attracted more publicity and interest because it marked something very special. On Saturday, November 13, 2010, Union Pacific commemorated the 50th anniversary of its steam program with an excursion across Nebraska from Omaha to North Platte, Nebraska. Leading the special train was number 844, which operated in freight service with Union Pacific until 1959. In 1960 the railroad placed it into service providing power for occasional business trains and special excursions across the huge UP network. This locomotive has worked for the Union Pacific continuously since it was delivered in 1944.

As a nod to Union Pacific’s 50th anniversary celebration, Iowa Interstate Railroad somewhat quietly arranged a special train pulled by one of its two Chinese QJ steam locomotives from Newton, Iowa to Council Bluffs. At Golden Spike Park it was hoped that QJ 7081 and 844 could be displayed nose to nose. That would have made for a very interesting if not symbolic pose, but unfortunately it did not happen. The two engines were indeed together at Golden Spike Park, but it was more like nose-to-tail, with 7081 at the far end of 844’s short train. 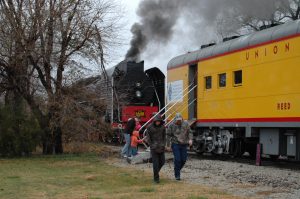 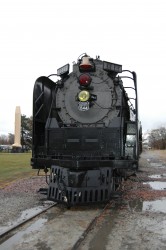 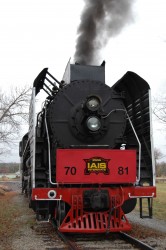 At any rate, I was able to be with 7081 and her train as she covered the lovely Iowa countryside on a perfectly enjoyable November day. This was a Thursday so there was a smaller than usual number of chasers. Iowa Interstate operates over the former Rock Island across the state, and the special stopped in Des Moines to pick up members of the Rock Island Technical Society. It was a classy trip and 7081 sported a new Southern 3 Chime Whistle. There was even a runby at Atlantic, Iowa. The next day was the park display; a day when November turned colder and wetter, with nonstop drizzle and harsh winds.

On Saturday it was 844’s turn. Overnight, Omaha received a generous dump of wet snow. As the special pulled away, the cold temperature and snow made for some tremendous clouds of steam. As we sped west, skies turned sunny, however the bitter wind would be with us all day. The train wasted no time because the 20 car special filled with passengers needed to get to North Platte, turn around, and head back to Omaha for a late evening arrival. The return trip  was led by heritage diesels from the railroad’s collection.

On Sunday, 844 led a much shorter passenger consist back to its home in Cheyenne, Wyoming, and I was there to record as much as I could on this very fast moving trip.

These two specials took place in a compressed timeframe and were very worthwhile in terms of footage. You can see a sample of a tasty program called Two Trains West here. Two Trains West is available on Union Pacific Steam – New-Century Journeys 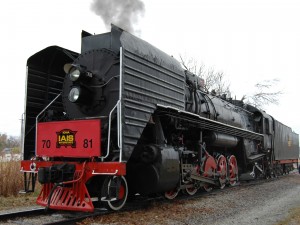 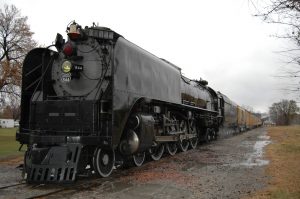 I have nothing but thanks and admiration for both Union Pacific and Iowa Interstate for their commitment to steam in the 21st century!