But steam locomotives in the Grand Scale size? Will this be interesting to our audience? I was skeptical. But, the Riverside & Great Northern was close to home in Wisconsin Dells. Their web site www.randgn.com is interesting, with lots of information about the museum and its history.

The site also has a great story to tell about the Sandley Light Railway Equipment Company. Sandley was started by a father and son in Janesville, WI in the 1940’s, moved to Wisconsin Dells in the 50’s, and lasted until the early 80’s. They built Grand Scale steam and diesel locomotives, rolling stock, and everything needed to supply the railroad requirements of zoos and amusement parks around the country. Many of these Sandley Grand Scale steam locomotives still exist and are operational. The R&GN has done a good job of restoring and interpreting the Sandley machines, factory buildings, and railroad park. The Sandleys used the park to entertain local and vacationing visitors (Wisconsin Dells has long been a popular vacation destination for the Upper Midwest) as well as a testing bed and demonstration site for potential customers. 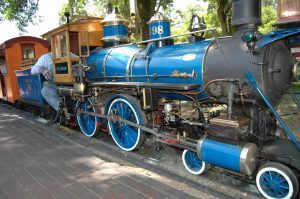 So the Sandley story is very interesting, but will there be enough visually to be of interest to our steam audience? I arranged with museum president Jim Hagen to spend a day at R&GN in July, arriving in time for a pre opening tour of the line by diesel. I learned that the line occupies the former right of way of the Milwaukee Railroad. The original line was built in the late 1850’s, linking Milwaukee and LaCrosse. The Milwaukee constructed a new line a few hundred feet west in the early 1900’s to eliminate grades and curves. The reconstruction was the largest railroad earth moving project in Wisconsin history, largely carried out with horse, mule, and manpower. Wow – that’s interesting!

Jim also showed me the huge steel bridge, built after a massive flash flood in 2004 washed out an earthen fill. The bridge is believed to be the highest and longest existing in the US for a miniature railroad. I was also impressed by the 150 year old rock cuts created for the original roadbed which the tiny trains now pass through on the two mile route.

The museum owns four Sandley-built Grand Scale steam engines and operates two right now. Number 98 was the engine in service when I visited, and 82 was in the shop, having just completed a new paint job and not quite ready be steamed up. The engines are kept in impeccable shape thanks to volunteers such as Gil, a retired machinist. The Sandleys probably never dreamed their Grand Scale Steam creations would still be steaming more than a half century later. Modern refinements and interest by future enthusiastic volunteers will keep them running for years to come.

The operations during a typical summer day were very interesting and involved the teamwork of engineer Bernie Hotzel and conductor Gene Van Roy. All the volunteers I met were genuinely in love with the little railroad, and I have to confess, now that I’ve witnessed this unique operation, I’m a bit smitten too.

But that’s not the end of the story. There are also two other fine examples of Grand Scale steam railroads in Wisconsin, both with historic and modern connections to Sandley.

The Milwaukee Zoo owns two large  Sandley Grand Scale steam engines, 1916 & 1924. These engines are capable of carrying much longer and heavier trains than R&GN’s locomotives. Engineer Ken Ristow, who is a Milwaukee County employee, is also a rail enthusiast. He’s operated big steam, such as Milwaukee Road 261, Iowa Interstate’s two Chinese built QJ’s, NKP 765, and Soo Line 1003. Ken has improved the performance of the Sandley engines since he joined the staff. I was impressed by the long train he was pulling on the loop around the large zoo complex. 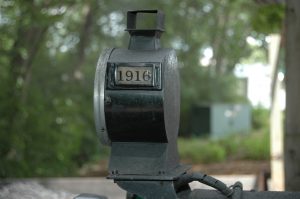 The Grand Scale Steam trains have been operating at the zoo since 1958 and the tracks take riders through wooded and open areas, past a small lake, and across a few grade crossings on a seven minute ride. This train also moved a bit speedier than the R&GN. The line is capable of operating two trains in the same direction when crowds are heavy. In fact, Ken was very apologetic since he was planning to have the second locomotive running for our visit, but an employee called in sick. Maybe next time.

The other example of Grand Scale steam is the Whiskey River Railway in Marshall. It’s based in the Little Amerricka Amusement Park, but departs from the noise of the thrill rides when it passes the facade of a western town, through a “tunnel”, and out into the countryside. Here riders enjoy seeing animals like sheep, cows, and mules, amid rolling hills.

Whiskey River Grand Scale Steam is slightly larger scale, with 16” track vs. 15” at R&GN and the zoo. The for-profit operation also builds locomotives and equipment in its Merrick Light Railway Equipment Works. Here is the modern connection to Sandley, headed by Darrell Klompmaker, another lifetime rail enthusiast. Merrick does much of the same type of work that Sandley did, creating locomotives for private individuals as well as zoos and parks. They also restore and repair light railway equipment, including Sandley machines owned by R&GN and the zoo.

So, it all ties together. All three venues have much to see, hear, and smell. Other than the size, these are real steam locomotives. They operate in settings similar to their bigger cousins. I believe anyone who loves big steam will enjoy seeing these fine locomotives in operation.

I also encourage you to check out these operations in person. You will not be disappointed!