Writing about the Durango & Silverton Narrow Gauge Railroad is difficult because it requires using all of the overused superlatives such as excellent, magnificent, wonderful, marvelous, supreme, outstanding, remarkable, first-rate, premier, unsurpassed, unequaled, unparalleled, unrivaled, and preeminent. Now that I’ve used these words in the very first sentence, writing about the Durango & Silverton will be even more strenuous. 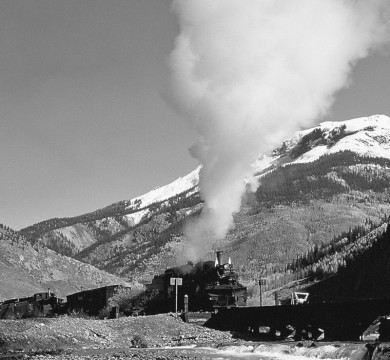 The Durango & Silverton is a remnant of the once large network of narrow gauge railroad lines running in Colorado. The town of Durango was actually founded by the Denver & Rio Grande Railway in 1880. The original line to Silverton was finished in the summer of 1882 for the main purpose of hauling gold and silver ore from numerous mines in the San Juan Mountains. The mining boom propelled the population of Silverton to a peak of over 1100 before silver prices collapsed and the mines played out.

In the early 20th Century the towns of Durango & Silverton rose and fell in economic and wartime cycles, while tourists even then often flocked to ride the scenic railroad line between the two cities. World War II brought uranium mining to the area but by the late 1940’s the line faced abandonment by the Denver & Rio Grande Western Railway, despite the popularity of its scenic passenger trains and the discovery by Hollywood as the backdrop for many major movies.

In the late 1960’s the Durango & Silverton line was designated a National Historic Landmark and as a National Historic Civil Engineering Landmark. In 1969 the D&RGW Railroad was allowed to abandon tracks south of Durango, which isolated the line to Silverton. Fortunately, Charles E. Bradshaw, Jr purchased the line from the railroad and set the course for establishing a successful tourist operation over the scenic route. Steam locomotives which had been mothballed decades earlier were restored to operating condition and wooden coaches were reconditioned for year-round use.

Today the Durango & Silverton is operated by American Heritage Railways, a company that operates other tourist lines in the United States. Trains operate over the 45.4 track miles between the two towns during the summer months, with a 26 mile schedule between Durango and Cascade Canyon Wye during the winter season.

Trains depart from downtown Durango and cover the first few miles in an urban setting. The route follows the free-flowing Animas River, and the tracks cross it five times. Between Durango & Silverton, the train is largely removed from visible civilization as it passes through forested river canyons,and the spectacular “Highline” where it traverses a rocky narrow ledge above the river.

Arriving in Silverton, trains come right down East 12th Street into the heart of town to discharge passengers. The riders take in the sights of the town and have some lunch while the train backs up to the wye on Mineral Street to turn around. After lunch, passengers re-board the train on East 12th Street for the trip back to Durango.

While the regularly scheduled trains are great, there are other options for those who want to see and photograph narrow gauge steam locomotives operating over the scenic rail line. The Durango & Silverton offers these special trains occasionally throughout the year, as do private operators who charter a train for one or two days.

One of my favorite experiences was with a two-day photo tour in the fall of 2005. A group of photographers chartered a steam locomotive, freight cars, and some passenger cars to haul us and our equipment.

We began our journey before sunrise in Durango as our train departed before the regularly scheduled passenger trains. Not long after we left Durango, a steady rain began to fall. Our first stop was near the Highline, where we got off. Meanwhile, our train backed up to a siding, so that the two regular trains on the schedule could pass. We set up in the rain and recorded both of the morning trains with their gold-colored coaches passing our location. Finally, our freight train passed the photo line.

Back on board, we proceeded to several more locations along the line where we recorded one or more “runbys” with our freight train. In the afternoon, we pulled into a siding at Elk Park to await the passing of the two trains returning from Silverton. By then the rain had turned to wet snow. One of the trains stopped briefly to pick up a group of hikers, who had flagged it. (The railroad has a program for wilderness hikers to get off or flag the trains at designated locations). After the two trains had cleared, our photo freight passed through the falling snow.

We loaded up and finally made it to Silverton, where we did some additional runbys before retiring to our lodgings for the night.

The next morning we were greeted by bright sunlight and mountain peaks covered in the white snow of the day before. It would turn into a wonderfully illuminated autumn day with glorious fall colors. We did some runbys by the old Silverton depot before loading our gear onto the train. All day we we were blessed with great light all the way back to Durango.

The video story of our photo expedition on the Durango & Silverton can be found on Yard Goat Images DVD Steam in the Mountains 1.

Steam in the Mountains DVD Combo