It was a Steamin’ Summer!

We’ve all had experiences in our lives that leave lasting memories. Some of these may have been good, or perhaps not so good, but they still can be meaningful and unforgettable.

Five years ago today I set off from home for some of the most memorable railroading experiences of my life. For the next two weeks I traded the air-conditioned comfort of my editing desk for a world of steam and smoke, and some of the hottest days I’ve ever lived through. This expedition was to get footage for what would become our biggest production ever. Where was this exotic place, you ask? Well, it was the Midwest in July!

The first stop on my nearly 3300 mile odyssey was Coldwater, Michigan, where I enjoyed three days covering the Little River Railroad’s giant celebration to mark the 100th birthday for #110. In addition to the guest of honor, locomotive Viscose #6, Flagg Coal #75 and Lehigh Valley Coal #126 all came to the party, as well as 110’s stablemate, Little River #1. The five engines were fired up and kept very busy. The first two days featured many short and long trips, and the locomotives did a bit of switching in the yards before enjoying birthday cakes made of wood, which were plunged right into their fireboxes! On the third day all five teamed up to pull a long train with every car in the collection, even starting a grass fire along the right of way. Incredible!

On the fourth day in Coldwater we watched as the three visiting engines were loaded onto heavy duty trailers and begin a wide-load highway journey to Rock Island, Illinois. After covering the convoy part of the way, we broke off to go find NKP 765, which was also on its way across Indiana to Rock Island. We caught up with 765 all right, but unfortunately it was a very easy chase. It was so hot that the railroad shut down. Shut down! There was a danger of heat kinks in the rails, so after several hours of traveling at just 10 miles per hour, all rail traffic was stopped until after dark. Can you imagine what the engine crew was going through as they plodded along in that kind of heat?

What was going on in Rock Island you ask? Only one of the largest gathering of steam locomotives in North America since the end of steam! We’ll get to the Rock Island Train Festival later, but first I made a stop at my second destination of Freeport, Illinois for a special photo charter at the Silver Creek & Stephenson. Again it was HOT but so was the Heisler. Some great props included antique cars, an old fire truck, period clothing, and a guest appearance by the railroad’s diesel “critter”. It was a very good day. 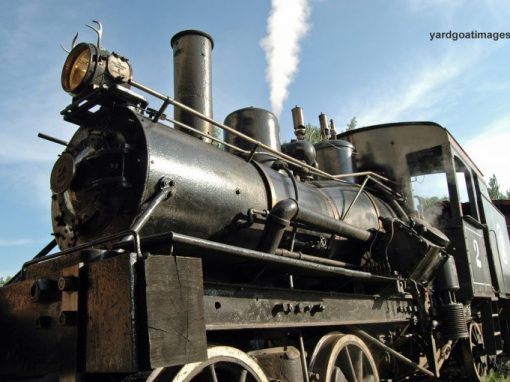 Next it was on to Rock Island for four days of the Train Festival. In addition to 765 and the three tank engines that came by convoy, Iowa Interstate’s two QJs and David Kloke’s beautiful Leviathan gave us a total of seven steam locomotives. But the Festival wasn’t just about steam. The Nebraska Zephyr train set and two additional classic diesels traveled here from the Illinois Railway Museum, plus displays of modern equipment from BNSF, Iowa Interstate, and Amtrak.  Many of the classic passenger cars from the Friends of the 261 were used in the longer excursion trips. The Zephyr and 765 each performed a trip to Bureau, Illinois, and QJ 6988 took a train to Iowa City. Shorter trips were made twice daily to Walcott, Iowa with 765 or one of the QJs, so there were many opportunities to ride or chase. The rail yard along the Mississippi River in downtown Rock Island was home to full size railroad displays as well as the coming and going of all the passenger trains. As the Festival ended we recorded 765 departing Rock Island while the two QJs worked to make up their train for departure. 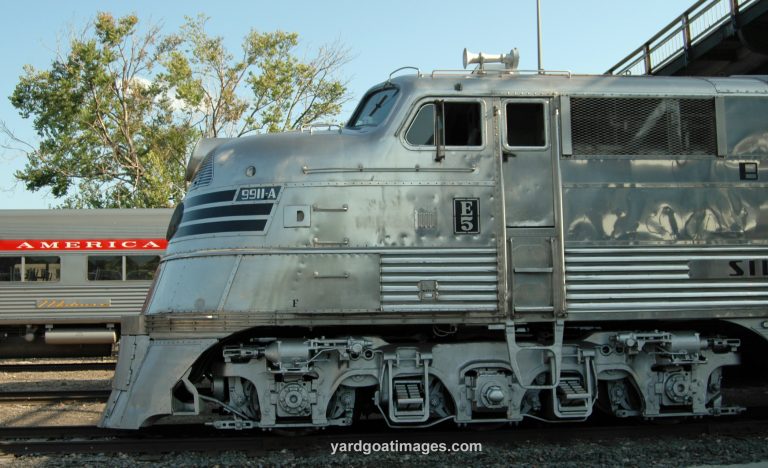 After the Festival I traveled with 765 across Indiana as far as Logansport, where it stopped for the night. Videographer Mark Paulson accompanied the QJ double-header back to Newton, Iowa, as he also did on the way to Rock Island. Mark and I teamed up at the Festival to get good footage onboard the trains as well as trackside.

When I finally got back to my office from this expedition and started to edit all the great footage, I realized this was going to take more than one DVD. In fact, the finished documentary of 4.3 hours is covered on three DVDs, called Steamin’ Summer, Volumes 1-3. Volume 1 covers the events at the Little River Railroad plus the loading on one of the tank engines and the highway convoy. This DVD has great footage of all five locomotives at work. The other two volumes cover the photo charter at the Silver Creek & Stephenson, the travels of the three big locomotives to and from Rock Island, and the Festival itself. We also covered many of the long and short passenger train trips, including the Zephyr. A visit to the Monticello Railway Museum in Illinois a few weeks later starring newly restored Southern 401 is included on Volume 3.

The Steamin’ Summer DVDs have special meaning to me because of the amazing two weeks I had on the road while covering all of these one-time events. They’ve become some of our most popular DVDs ever. Follow the links below for previews, information, and ordering. You may also order by mail. Simply mail a check or money order for your selections (MN addresses please add 7.775% sales tax). Shipping is $6 for first DVD and $1 for each additional for US or $12 and $3 outside the US. Mail to: Yard Goat Images, 112 3rd AV NE, Minneapolis MN 55413.