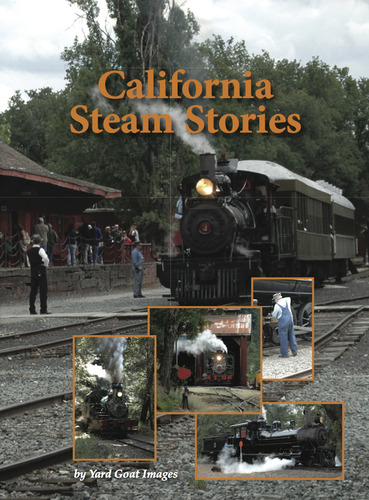 California has a rich railroad history. After the Transcontinental Railroad was completed in 1869, California grew and prospered at a rapid rate. Railroads of all types played significant roles in the state’s history, and continue to make innovative progress today. We present three sites which preserve and operate unique pieces of California rail history.

Roaring Camp & Big Trees Narrow Gauge Railroad - (Felton, CA) Big Trees Ranch was founded in 1867, in order to preserve a large area of redwood forest from logging. The railroad began operating in 1963, and runs 3.25 miles on steep grades to the top of Bear Mountain. Passengers ride through a canopy of giant redwoods pulled by Shay, Heisler and Climax geared locomotives. We captured our footage during the annual Civil War encampment. To handle the large crowds, the railroad operated all trains in two sections during our visit, featuring Shay Dixiana and Heisler Tuolumne.

Billy Jones Railroad - (Los Gatos, CA) Our program features #2, a Grand Scale locomotive built in 1905 for the Venice Railway in Venice Beach, CA. In 1939, railroad man Billy Jones discovered #2 in a scrap pile and bought it. After restoring the 2-6-2, he built a railroad to run it on. Following his death, the railroad was rebuilt on a nearby park land. The railroad also has 3 diesels and steam locomotive #5, a 4-6-2 which had just arrived on the property prior to our visit.