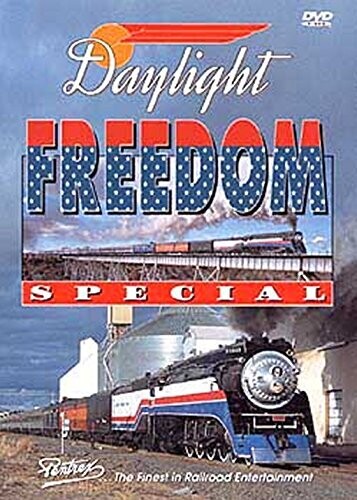 In March 2002, Daylight 4449 returned to the rails for the Columbia-Deschutes Special, a 2-day excursion that took the mighty steamer through the scenic wonderlands of the Columbia River Gorge and the Deschutes River Canyon. Making the trip even more remarkable was the Daylight's patriotic paint scheme: the elegant steamer was repainted for this trip in the same glorious red, white and blue colors she wore during her American Freedom Train tours of 1975-1976.

The Columbia River Gorge and Deschutes Canyon provided outstanding settings for the magnificent locomotive and her Freedom Train colors. The Deschutes River Canyon is an inaccessible and visually stunning site where canyon walls rise 2,200 feet up from the tracks. 4449 looked gorgeous in her revisited colors, pulling former Amtrak "Heritage Fleet" and Northwest Rail Museum Daylight cars, unassisted by diesel helpers!

Leaving Portland, Oregon and Vancouver, Washington, the Daylight traveled the north bank of the Columbia River for 110 miles. Then, turning south, she continued to Bend, demonstrating her awesome power. Highlights include fantastic pacing sequences, high bridge crossings, and an added segment showing the Daylight in all her different paint schemes!

60 Minutes (plus 25 minute bonus film)
In Color with Stereo Sound and Narration
Full-screen (4x3) Format
Save this product for later
Display prices in: USD