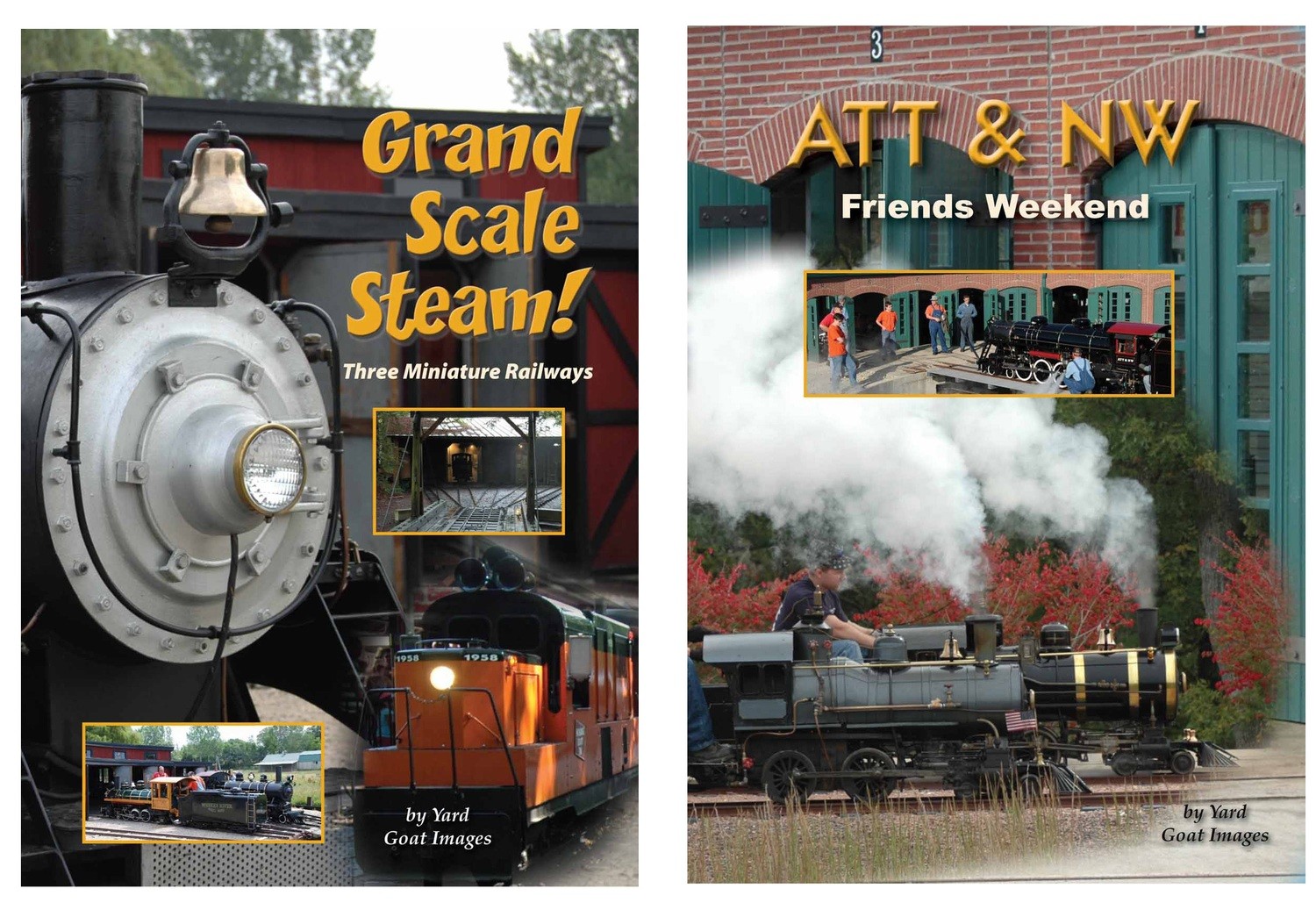 Live steam comes in many sizes, from the very small to the very large. Grand Scale railways, generally classified as operating with 12-24” gauge track, are popular with zoos, amusement parks and private operators throughout the world. Locomotives and rolling stock are usually large enough to ride inside, rather than straddling on top with smaller scales. Our program takes you to three fine North American examples of Grand Scale!

Whiskey River Railway - located in Marshall, Wisconsin, at Little Amerricka amusement park. The park and 16” gauge railroad were founded in 1991 by the late Lee W. Merrick. After departing the station, trains quickly leave the park rides behind as they pass through a long tunnel and enter a rural landscape that includes domestic farm animals plus zebras and other exotic creatures. Also on site is the Merrick Light Railway Equipment Works, which builds and restores locomotives and rolling stock. Four steam locomotives operated during our visit, including 4-6-2 Pacific #1919, which was built here.

Redwood Valley Railway - this 15” gauge railroad is perched high above San Francisco Bay near Berkeley, California. It was founded in 1952 by Western Pacific mechanical engineer, Erich Thomsen. All four of the railroad’s oil-fired steam locomotives were built in the Redwood Valley shops. We’ll see two locomotives in steam plus dramatic scenes of fog drifting along the route through stands of towering redwoods.

Milwaukee County Zoo Train - two steam locomotives built by Sandley Light Railway Equipment operate on this 15” line built in 1958. The line is a continuous loop which takes passengers around the beautiful grounds in about 12 minutes. The Zoo operated an extra-long train behind fast-moving 4-6-2 #1924 in honor of our visit. We also catch a little action with diesel #1958 in Milwaukee Road colors. Running time 81 minutes

The Arborway, TT and Northwestern, (ATT & NW) is a Grand Scale Miniature Railroad that runs on 15” gauge track through spectacular Missouri Ozark surroundings. There are more than three and a half miles of 2% grade single and double track main-line with two tunnels on the site’s rolling terrain.

The inspiration for the ATT & NW came in the year 2000 from St. Louis businessman John R. Woods, who wanted to create a distinct and authentic site for family, friends, and business associates to gather. Sadly, not long after seeing his dream railroad become operational, John Woods died accidentally in 2008.

The Woods family has kept the railroad intact as a non-profit organization. The ATT&NW is not open to the general public, but it’s possible to visit and volunteer after becoming a member of the Friends of the ATT & NW.

Our program was recorded at an annual Friends Weekend, which features running all of the ATT & NW locomotives and rolling stock along with visiting equipment well into the night, along with music, food, and good company.

We were impressed not only with the railroad and variety of equipment, but for the emotional attachment the volunteers seem to have for this magical place. We’re grateful to the Arborway, TT & Northwestern for allowing us to bring you the events of the Friends Weekend! Running time 86 minutes