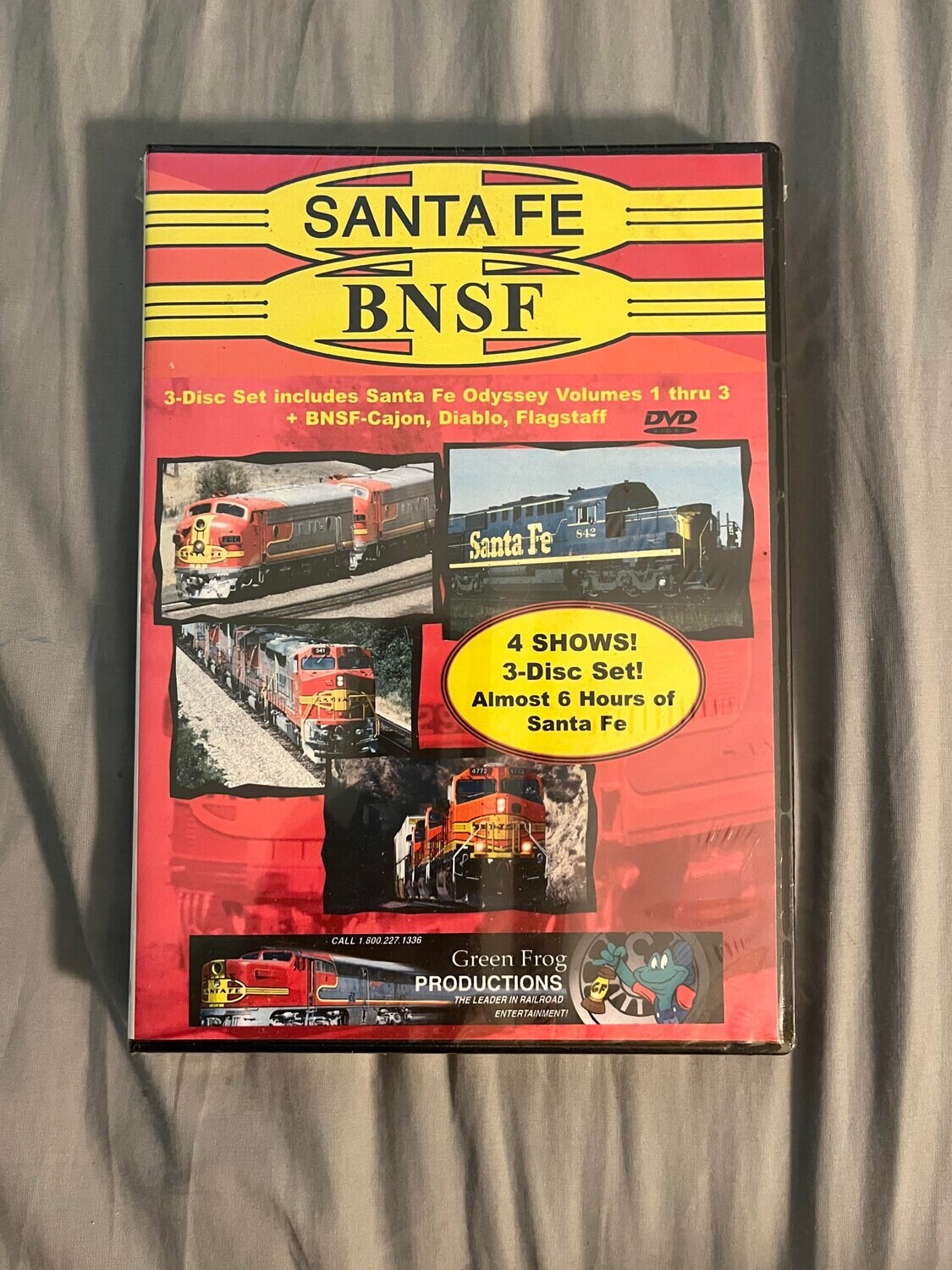 The action on these programs are a result of many rail-fan trips by the noted rail photographer Emery Gulash, although none of the trips were devoted exclusively to the Santa Fe railroad. Emery captured enough 16mm color film to produce an incredible chronology of the Santa Fe covering a period of almost 30 years!

From 1952 until 1980, Emery shot the Santa Fe from Chicago to the west. The DVDs display the Santa Fe FT freight units, the PA passenger power, and a variety of switchers and road trains. The 'Warbonnet' paint scheme and the
change to the Santa Fe blue paint scheme is also covered in this chronology.

There are a great number of incredible shots of the famous passenger fleet, interspersed with freights over a vast portion of the line.

From the Camera of Emery Gulash -- From 16mm Color Film

Following in the footsteps of Santa Fe Odyssey Volume 1, comes Volume 2. Filmed in the late 70's, Emery Gulash captured the transition of the Santa Fe as it aligned itself for the 80's and 90's. This DVD set takes over where Volume 1 left off.

Coverage starts in Illinois and continues west to include California. There is incredible action in the mid-west and west, all photographed on sharp, crisp 16mm color film. Action at Cajon Pass and Tehachapi are typical Gulash with Incredible coverage and photo composition. You will see plenty of passenger trains and freights galore, as well as some of the older transitory diesel paint
and color schemes.

From the Camera of Emery Gulash -- From 16mm Color Film

During the summer of 1991, Green Frog traveled with noted film photographer Emery Gulash and videographer Steve Neff to photograph the Santa Fe from Chicago to Kansas City. You read about this fantastic division in Trains Magazine, now see it in all it's glory on professional video shot by some of the best Rail-fan photographers.

This production took over 600 hours to shoot using four professional cameras and is one of the fastest paced productions you will see of this railroad. Exciting action, great stereo sound, War bonnets galore...what more could you ask for a fitting tribute to this great and popular railroad series.

From the Cameras of Green Frog & Steve Neff

Travel with Green Frog via the Professional Digital photography
of Rich Scheid through spectacular Cajon Pass, Canyon Diablo, and Flagstaff on this whirlwind railroad video adventure through the far West. At Cajon, we’ll visit the scenic Tunnel District as well as Blue Cut, Sullivan’s Curve, Mormon Rocks, and Cajon Station.