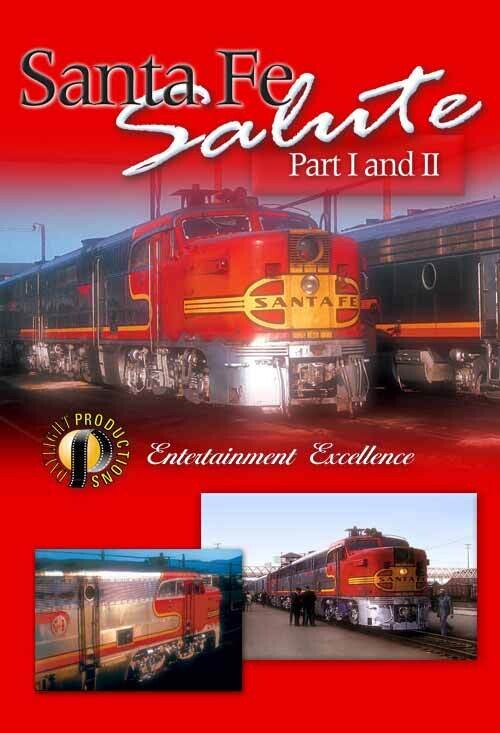 Santa Fe Salute Part 1
Join us for an entertaining journey back in time as we salute the Atchison, Topeka & Santa Fe Railway. The history of the Santa Fe is presented from its early beginnings through the late 1980’s using vintage photographs and 16mm film.

Santa Fe’s passenger trains were legendary. Relive those glorious days with scenes filmed aboard the San Francisco Chief and the Super Chief trains. Ride inside the cabs of warbonnet F-units and FP-45’s pulling both trains at 90 mph.

Grab your grip and lantern and swing aboard the Super C, Santa Fe’s first high-speed, cross-country piggyback train on an eastbound trip from Los Angeles. Ride in the cab of the F-45 locomotives and cabooses of the
Super C, forerunner of the modern intermodal train.

Santa Fe Salute Part 1 is 56 minutes in length, in color with some black and white film, informative narration and exciting natural sound.

Santa Fe Salute Part 2
Daylight Productions continues its tribute to one of America’s best-known railroads. In part 2 we’ll visit the busy desert mainline near Klondike, where trains climb the grade to Ash Hill.

Ride in the cab of a mainline manifest train. Savor the view on the rear platform of the caboose on the fast199 intermodal train. Visit a west coast CTC dispatching center. Ride the cab and caboose of a branchline freight over trackage that is now gone.

Most of the trains in this video have cabooses.

Santa Fe Salute Part 2 is 60 minutes in length, in color with stereo audio and informative narration.