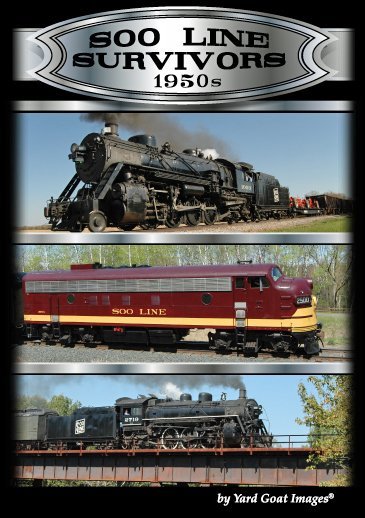 In the early 1950s, the Soo Line and its affiliated lines comprised a regional railroad system linking Minneapolis, Winnipeg, Duluth-Superior, Chicago, and its namesake city, Sault Ste Marie, Michigan. Agricultural products and manufactured goods moved on tracks stretching from Montana to the Great Lakes. The Soo faced post-war challenges of re-equipping its roster with diesels while getting the last miles from its steam locomotive fleet. Passenger service was an important but declining segment of the business in the early 1950s.

Thanks to preservation efforts starting with the Soo Line itself, and continuing with private groups and museums, examples of steam and early diesel locomotives are still with us. We can’t actually return to the early 1950’s, but we can do a bit of time travel with the help of three Soo Line survivors. For several years prior to 1954, all three of the locomotives in our program, 1003, 2500, and 2719 were going about their business on Soo Line rails at the same time. Perhaps they met along the way…

1003 - documents another legendary Autumn photo charter with the 2-8-2. Rural Wisconsin along with some spectacular sunset scenes.