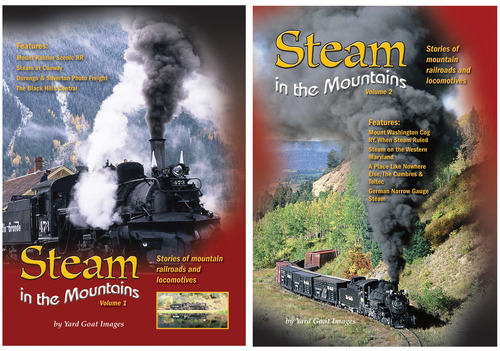 Steam in the Mountains - Volume 1

Mount Rainier Scenic RR is known for its collection of geared logging style locomotives from each of the major builders: Climax, Heisler, Shay, and Willamette. These were built for steep mountain grades and tight curves. We see five locomotives in operation during two visits, including a photo charter with log cars, and with the NRHS 2011 convention special.

Steam at Conway - we make a brief October visit to Conway Scenic Railroad in the White Mountains of New Hampshire and capture Canadian National #7470 pulling both passenger and freight trains.

Durango & Silverton Photo Freight - here are our favorite scenes from a 2005 two-day charter, featuring runbys in areas only accessible by train. We encounter a snow storm the first day, and a backdrop of snow capped mountains on day two! (Analog)

Mount Washington Cog RY, When Steam Ruled - this is the oldest mountain-climbing cog railroad on earth, built in 1869. It was 100% steam powered until 2008 when the first of several home-built diesels appeared. We recorded this footage in October 2008 during the last days of steam, with as many as 4 locomotives visible at once. These scenes are no longer possible as diesels have taken over all but one trip up the mountain each day.

A Place Like Nowhere Else, The Cumbres & Toltec - this is perhaps the best example of narrow-gauge mountain steam railroading in North America, with equipment and line-side structures frozen in time. Here are some of our favorite scenes from an autumn 2005 photo freight special. (Analog)