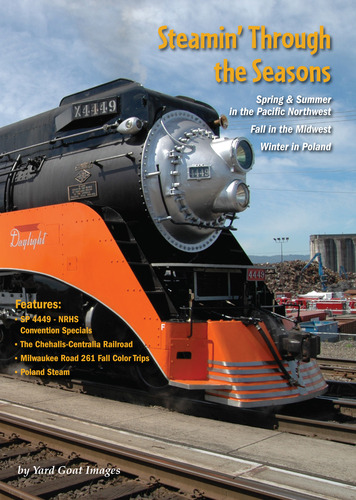 Steamin' Through The Seasons

Spring & Summer in the Pacific Northwest, Fall in the Midwest, and Winter in Poland

SP 4449 - NRHS Convention Specials - the National Railway Historical Society 2011 Convention was held in Tacoma, WA. Southern Pacific 4449 made three special excursions for the event, including a rare mileage trip over Stampede Pass. We cover all three journeys featuring the colorful 4-8-4.

Milwaukee Road 261 Fall Color Trips - an annual tradition each Autumn were back-to-back Saturday and Sunday excursions between Minneapolis and La Crescent, MN. Our footage comes from trips over many years presented in the order of a typical weekend operation.