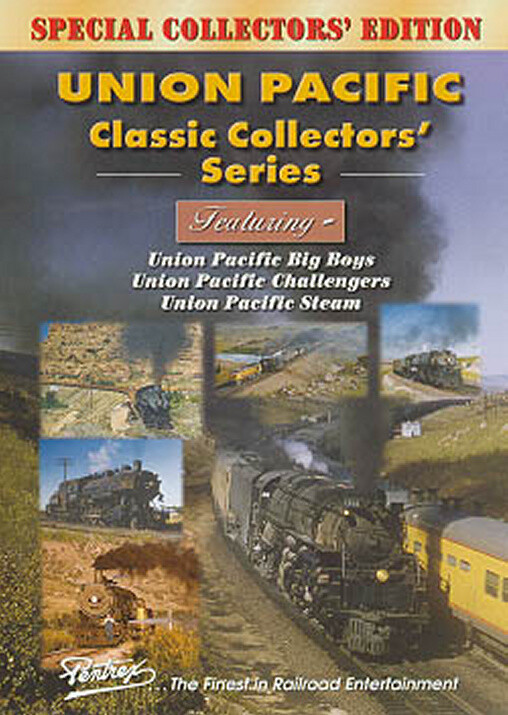 During the 1950s, steam ruled the Union Pacific fleet. From the smaller 0-6-0s to the giant Big Boys, these workhorses were the backbone of an empire. Step back in time and savor the sights of steam on the UP in three different shows originally released as part of the Video Rails Classic Collector's Series. Combined on this DVD are:

Union Pacific Big Boys (30 Minutes)
Charge out of Cheyenne and Laramie and blast up Sherman hill with these kings of steam-the largest, heaviest steam locomotives to ever run in the western U.S. You'll see spectacular scenes of Big Boy doubleheaders, some with UP turbines. The rare footage captured here is combined with original sound re-recorded in Hi-Fi Stereo to enhance your viewing and listening experience.

Union Pacific Steam (30 Minutes)
Here are the smaller and medium sized steam locomotives that performed a major part of the work on the UP system. See 0-6-0s, 2-8-0s, 2-8-2s, and 2-10-2s moving freight along branchlines and in yards. Witness UP's mighty 4-8-4 Northerns racing across Nebraska. These and other unique scenes pay rich tribute to Union Pacific's steam heritage.

1 Hour 30 Minutes
In Color with Appropriate Stereo Sound and Narration
Full-screen (4x3) Format
Save this product for later
Display prices in: USD