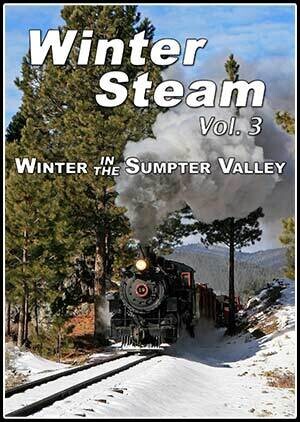 SKU 3P STV Winter 3
$19.99
In stock
1
Product Details
In February of 2014, the Sumpter Valley of eastern Oregon was alive with the sights and sounds of steam, as the 3-foot gauge Sumpter Valley Railroad hosted its first ever winter photography event. Held on February 1st and 2nd, this special weekend featured both operable steam locomotives: wood-burning Heisler #3 and oil-fired 2-8-2 #19.

This program chronicles the 2-day Lerro Productions charter, as both locomotives pulled mixed trains on the rebuilt trackage between McEwen and Sumpter. With fresh snow blanketing the nearby Elkhorn Mountains, you'll see a variety of runbys as we explore this often overlooked narrow gauge line.

In addition to the Sumpter Valley coverage, this program includes footage from January of 2011, as Rio Grande Scenic Railroad 2-8-0 #18 pulls an excursion over La Veta Pass in southern Colorado. This was the first and only time the railroad has ever operated steam over the pass in the winter. The surrounding Sangre de Cristo Mountains completely dwarf the train, providing a stunning backdrop to some remarkable mountain railroading. While this footage was originally included on Winter Steam Vol. 1, it's been re-released on this program so it can now be enjoyed in full High Definition on the Blu-ray version.

This program has minimal narration (with the option to turn it on or off) and no distracting music.

In addition to the standard widescreen DVD-R, this program is also available on HD Blu-ray disc.