The Cumbres & Toltec – A Friend In Need

The Cumbres & Toltec Scenic Railroad is going through some very tough times and needs a hand to get back on its feet.

The main cause of its current difficulty was the disastrous fire that hit Lobato Trestle in late June, 2010. The trestle is currently out of service and repair costs exceed insurance coverage. The New Mexico Department of Transportation has allocated $825,000 to help fund the repair of the trestle. Private donors, including $20,000 from the Friends of the Cumbres & Toltec Scenic Railroad, added about $100,000 for repairing the trestle. The state of Colorado has directed $135,000 to the project. Insurance on the trestle covered only $360,000, with the balance of the estimate of $2.042 million repair bill covered by reallocating state funded track rehabilitation money to the repair project. The bridge will be rebuilt and open for the 2011 season. 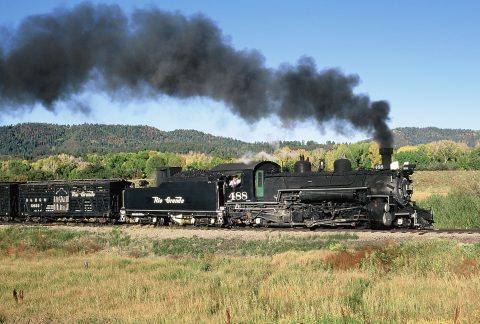 A Photo Freight Special on the Cumbres & Toltec

The bridge fire and its impact on the Cumbres & Toltec

But the bridge disaster was only the start of the difficulties that have plagued the Cumbres &Toltec this season. After the fire, many would be visitors had the misunderstanding that the railroad was no longer running trains. More time and money was invested to get the word out that trains were still operating over most of the line. The money spent for unplanned advertising could have been spent in other ways to maintain or improve the railroad.

While the fire had a great impact on operations, the Cumbres & Toltec scrambled quickly to restore service over much of the line. The trestle is about 4 miles east of Chama. Most of the railroad’s locomotives were at Chama at the time of the fire. In the first days following the fire it was assumed the trestle could be repaired within a few weeks. One locomotive was moved by truck from Chama to Osier so service could resume. Once the engineering reports confirmed the worst, more equipment was moved by truck. These heavy hauls of equipment were very expensive, and again, the money spent could have been used to maintain and improve the railroad.

To further encourage visitors to ride the Cumbres &Toltec, the railroad reduced its fares by 10%, reducing revenues still further. Coupled with the decline in the numbers of visitors, the railroad quickly found itself in a crisis situation.

The operators of the line, Friends of the Cumbres & Toltec Scenic Railroad Inc. face daunting financial challenges. With lower than expected revenues and higher than projected expenses, they need help. Click here for information about making a Lobato Trestle Donation.

Now, let me tell you why the Cumbres & Toltec is so special.

It was once part of Rio Grande’s San Juan Extension, serving the silver mining district of the San Juan mountains in southwestern Colorado. It was built as a 3 foot narrow gauge, as were all of Rio Grande’s tracks at the time. The inability to interchange cars with other railroads led the railroad to begin converting its tracks to standard gauge in 1890, but traffic over the San Juan Extension did not warrant conversion to standard gauge. After World War II a natural gas boom was credited for a brief time of prosperity for the line, but traffic dropped to a trickle in the 1960s. In 1969 the Interstate Commerce Commission allowed Rio Grande to abandon its remaining narrow gauge lines, ending the last use of steam locomotives in general freight service in the United States.

A group of railway preservationists and local interests managed to save the most scenic portion of the line. The states of Colorado and New Mexico in 1970 jointly purchased the track and structures from Chama to Antonito, 9 steam locomotives, 130 freight and work cars, and the Chama yard and structures for slightly more than $500,000. Today the railroad is like a time machine going back to when the railroad ended service. Even further back considering the Rio Grande didn’t make many major changes from the 1930’s to 1969! Find out more.

You’ve probably been on many train rides at museums and tourist railways. The Cumbres & Toltec is different. It’s not 30 minutes or an hour. It’s darn near a day long trip to cover the 64 miles with sharp curves and challenging grads. You don’t have a comfy seat in an air conditioned coach. Yes, there are coaches with seats, but on the Cumbres &Toltec, the best place is the open air car, where you stand and move around to take in the great views, and to watch the locomotive work hard over much of the journey. And dirt! When you are done riding in the open air car, be sure to find a restroom with a good mirror. You will be amazed to see what you look like! Grandma and the smallest kids might not like this as much as the train ride at Disney World, but the rest of us appreciate a bit of soot with our steam locomotives! This is as real-world with the old Rio Grande as you can get. If you like railroading at any level, you must experience the Cumbres & Toltec!

I’ve been a member of the Friends of the Cumbres & Toltec for at least a decade. The railroad has been challenged before and it will be challenged again. I’ve been most impressed with the level of volunteerism here. Each summer the Friends sponsor work sessions. These are well organized teams who have a defined mission with well executed plans in which to complete the task within the 5 day time periods. Longer projects are split up over multiple work sessions. In 2011 the group will hold eight, five day volunteer work sessions. Click here to find out more about upcoming work sessions.

I love the fact that the Cumbres & Toltec passes almost nothing to do with the 21st century. There are some road crossings, and a few places where you are close enough to roads to see and hear traffic, but in general there are few homes or built up areas over much of the way. You are traveling either in mountainous terrain or in valleys and plains that are beautiful at any time of the year.

And I love Chama. The town is small, but has some great old buildings. The Chama yard with its historic railroad structures again is a time warp. My favorite structure is the gritty but grand coaling tower. It sits at the east end of the yard. When I was last there, maps were available for self-guided tours of the yard. Be careful!

So, how can you help?

Make a donation to any of a number of choices
Join to become a member of the Friends of the Cumbres & Toltec
Volunteer to help in many different ways
Visit soon – take a ride – bring a friend, or two

Our Friend, the Cumbres & Toltec, is in need. Can you help? 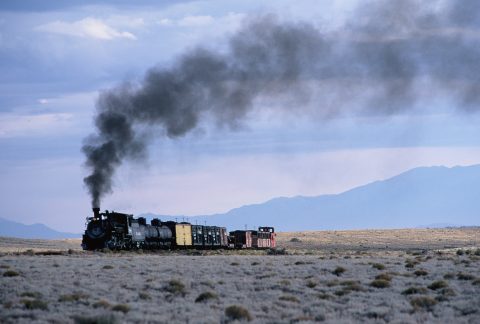