Cass Scenic Railroad has long been on my “bucket-list” of rail experiences to savor once again. I had been there once before on an NRHS Convention Trip in 2003, but it was such a brief overview that I wanted to come back to this beautiful place and explore it more fully. I discovered that 2013 was to be the 50th anniversary of the Cass Scenic Railroad State Park. That’s right, this remarkable steam logging railroad is actually a West Virginia State Park. Perhaps this would be a good time to offer a brief history lesson about the railroad and how it came to be preserved and operated today.

In the early 1900’s, the West Virginia Pulp & Paper Company began harvesting the trees that dominated this area of the state; red spruce for paper making and eastern hardwoods  for lumber. The logging railroad was built into the forested mountains to bring the timber to the company town of Cass. Named for Joseph K. Cass, a vice president and company investor, Cass was typical of company towns with housing for workers, a commissary for provisions, a school, and even religious facilities. 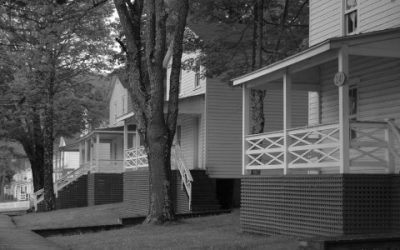 Tracks were laid on grades up to 9% using switchbacks to achieve elevation. A smaller company town was established at Spruce, where a pulpwood plant removed the bark and split the wood and loaded into railcars to Cass, then forwarded by the C&O Railway to a paper mill in Virginia. Work continued for nearly 60 years until much of the timber was depleted and changes in the industry forced the company to end operations in June, 1960. The town was sold for a never materialized development, and the railroad was sold to a scrap dealer. This might have been the end of the story, were it not for Russell Baum. Russell Baum was a photographer and railfan who had spent time during the 1950s riding and photographing the log trains. He spoke up and started a campaign to preserve the line for a scenic railroad. He, along with area residents and business people, successfully persuaded the West Virginia legislature to buy the part of the railroad that ran from Cass to Bald Knob before the scrapper removed it. In June, 1963 the first operations for the public began at Cass State Park. After proving itself successful, the investors who had bought the town of Cass agreed to sell it to the state, along with the sawmill and surrounding properties. The railroad and the town of Cass are now on the National Register of Historic Places.

In addition to the state of West Virginia, today’s Cass Scenic Railroad is supported by the Mountain State Railroad & Logging Historical Association (MSR&LHA). This nonprofit group of volunteers has accomplished what was not always possible with state funding, such as the equipment display at Whittaker Logging Camp, acquisition of additional locomotives, and the construction of a restoration shop. MSR&LHA also sponsors the annual Cass Railfan Weekend. This gathering happens each year, rain or shine, the weekend before the public season begins, and is the largest source of funding for the nonprofit. Money from this event is plowed back into acquiring and restoring vintage equipment. Railfans armed with a vast array of modern and sometimes historic camera equipment descend on this remarkable mountain railroad. They wear rugged clothing, prepared for all types of May weather in the beauty of West Virginia. For the 50th anniversary, MSR&LHA scheduled three days filled with different trips and runby locations, using four Shay locomotives!

Our experience at Cass Railfan Weekend

Jan and I drove to West Virginia and arrived at Cass after dark the night before Railfan Weekend began. Because Railfan Weekend is held one week before the regular season begins, there are not as many of the seasonal lodging facilities available. This area attracts many visitors during the summer when Cass is operating and in the winter when the many ski resorts are open. In between, most lodging is closed. One of the few places open was the Inn at Snowshoe, and it was a good place to stay. Unfortunately our GPS unit tried to steer us astray and we were a little uncertain how to get there. No problem, just pull out the cell phone and call for help. That’s when we discovered another quirk about the area around Cass; there is little or no cell service due to the proximity to the Robert C. Byrd Green Bank Telescope. The huge radio telescope sits within the United States National Radio Quiet Zone. Just be aware if you are addicted to your cell and its apps, you might have to make lifestyle alterations when you are here. (The Inn at Snowshoe offered a central lounge with a hotspot for phone and internet. It was quite crowded every time we passed through this large room). We eventually made it to Inn at Snowshoe by using my keen sense of direction, (and by Jan stopping to ask somebody). The next morning we got up quite early and grabbed some sandwiches “to go” at the Inn, thinking we might not have enough time to eat the included breakfast. (There is time, but be in line by the door when they open the buffet, and eat quickly, we found out the next day). We could have also signed up for breakfast at the Cass Community Center, which is just up the hill from the depot, but decided to take advantage of the complimentary meal at the Inn, which was very good compared to typical motel “breakfasts”. Arriving at Cass there was already a photo line going near the historic depot. The sun was shining brightly as they began bringing the 4 Shays toward the depot. There were a series of poses and runbys with a freight train and a log train before we boarded the double headed passenger train, which took as far as the ghost town of Spruce. A freight train powered by one of the Shays accompanied the passenger train each day for additional photo opportunities. Locomotives were also swapped between trains each day to give us a variety of combinations. Runby locations vary from year to year to provide variety to the many participants who almost never miss the experience. This year a section of trackside near Old Spruce had been carefully cleared by volunteers for a new runby location. On this first day we stopped for runbys at several locations. Whittaker Station is the location of a recreated logging camp, and perhaps more importantly, the site of modern restroom facilities. I believe the train stopped here twice each of the three days to the relief of most of us.

We arrived back at Cass in mid-afternoon for tours of the Cass Shops and the MSR&LHA Restoration Shop, where work was progressing on Climax #9. A framed photo of #9 hangs on the wall showing what the Climax looked like “Before”. This offered a sobering picture of how much work has already gone into rebuilding this locomotive. I sure admire people who are able to do this restoration work. Following the restoration shop tour we adjourned to the main Cass Shop building for an address by Trains Magazine editor Jim Wrinn and State Park officials commemorating the 50th anniversary of Cass Scenic Railroad State Park. A catered dinner, followed by keynote speaker Jim Wrinn concluded the day. A night photo session scheduled for later in the evening had to be cancelled due to lightning in the area. On Saturday we departed Cass at 8 AM by double-headed Shays to travel to the top of Bald Knob, the third highest point in West Virginia. Along the way there were photo runbys at several locations including Old Spruce, Oats Run and the Emergency Water Tank. Arriving at Bald Knob, we found ourselves enveloped in pea soup thick fog, but that didn’t stop us from doing several spectacular runbys. I have a fondness for steam in the fog. It almost seems like the fog makes everything black and white, and the sounds become a more important part of the occasion. The video scenes from these foggy runbys, in my opinion, are stunning. The cold fog made our lunch on Bald Knob accompanied by hot soup even more welcoming. As we headed back to Cass, more runbys were made under less foggy conditions, but rain poured down on us as we arrived at the depot and made our way to the town’s community center for dinner. Fortunately, the rain moved on fairly quickly and the night photo session was well attended. One of the most popular events of the Cass Railfan Weekend is the famous locomotive race. This took place between the depot and Cass Shops on Sunday morning, but there was a lot of action to capture before that started. Jan shot video near the depot while I spent time near the shop and wooden water tank. One by one the locomotives stopped at the tank and I recorded video from several angles. After the four Shays were watered the locomotives moved to their positions for the races. This event gives all the photographers a chance to record spectacular images with towering plumes of black smoke as the engineers push the locomotives to their limits. Photo lines formed in several places. I wiggled into the photo line near the water tank, where the long lens guys were. Jan recorded a spectacular shot as three of the Shays passed from left to right, one by one on different tracks. Several races were performed so everybody had a chance to move around to get different angles and perspectives. 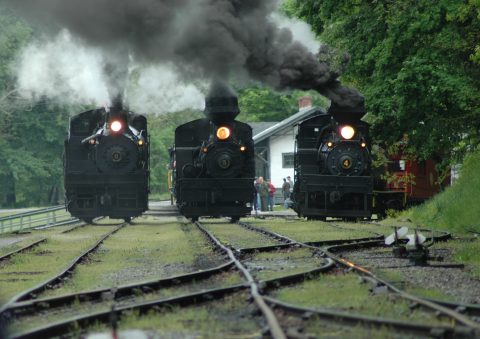 After this popular photo event, I went with the train. Jan decided to take our car to one of the grade crossings and some other spots visible from the road. There were several runbys including Leatherbark Creek, Gum Field and the “S” curve. Today the trains went as far as Whittaker, where we had lunch as another rain shower moved in. Entertainment was provided by a number of world champion wood choppers. Axes were tossed at targets and used to cut timber. A log cutting demonstration used manual tools and also some conventional and “souped-up” chain saws. Sunday’s events ended earlier to allow participants to begin their journeys home. The now steady rain on our way back to Cass forced us to scrub the last planned runby. In spite of some of the inclement weather, this was a fantastic weekend. The Mountain State Railroad and Logging Historical Association volunteers did an outstanding job of planning and organizing this event to accommodate the needs of a large crowd of professional and amateur photographers and videographers. The crews operating the trains, the car attendants, food providers, and countless others did an excellent job in keeping everybody happy. I encourage you to participate in one of these Railfan Weekends.

To whet your appetite, our DVD which documents this special 50th anniversary event is cleverly called Cass: Railfan Weekend. The program has 94 minutes of stunning scenes in all kinds of weather. Jan is an accomplished videographer, and we captured our footage from different angles to provide some unique simultaneous views of the action. The tripod-mounted high definition cameras we use are steady and the sound from our external microphones is fantastic. The DVD program has a short narrative at the start of each day’s chapter, and then we let the 4 Shays and squealing brakes do the rest of the talking. The documentary also features the crews caring for the locomotives before, during, and after the photo events and other behind-the-scenes action. See more information and a preview here. I know you will enjoy this DVD. Thanks for reading! Steve Mitchell, Yard Goat Images 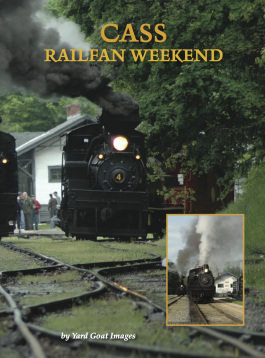