I’ve been interested in visiting the Monticello Railway Museum for some time, and that interest grew considerably in 2010, when steam locomotive Southern 401 was restored to operating condition.

When I arrived early one Saturday summer morning, I was totally amazed by what I saw.

The Monticello Railway Museum property is huge! They have a large engine shed big enough to hold four locomotives. Behind the engine house there is a back shop building. Other large buildings house car storage, machinery, equipment displays, etc. A new three track car storage building  had just been completed, and volunteer track workers were making progress on complex switches leading to the structure. 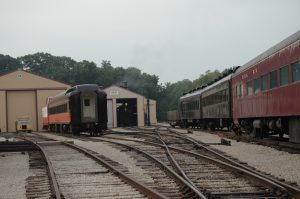 They need all those buildings to hold a remarkable variety of equipment including more than a dozen steam and diesel locomotives. Many of the diesels are in operating condition. The Monticello Railway Museum not only has a vast collection of passenger and freight cars, they also have a sizable amount of “company service” equipment, including cabooses, cranes, a snow plow, a pile driver, Jordan Spreader, tool cars, etc. plus many types of maintenance-of-way equipment. A complete equipment listing can be found here.

There was a lot of equipment stored outdoors when I was there, but no doubt much of this will soon find a home inside when the tracks are in place inside the new building.

The Monticello Railway Museum, is located in Monticello, Illinois. It is a not-for-profit organization which has been around, under various earlier names, since 1966.

Its tracks run on portions of two parallel railroads, the former Illinois Terminal  and the Illinois Central Gulf,  over lines which ran between Monticello and the town of White Heath. A cross-over track constructed by volunteers enables the trains to reach the historic Wabash Depot in downtown Monticello.

Even though Monticello Railway Museum owns several steam locomotives, none had operated since 1987. In the mid 1990’s a donor proposed selecting one locomotive for restoration. Southern 401, on display at the museum since 1971, was determined to be the best candidate, and after many years of work, the locomotive made its debut in 2010. It was converted to burn oil during the restoration work. Today 401 operates one weekend per month from April through October.

So, my main purpose for the weekend was to experience the beautiful 401, a 2-8-0 Consolidation built by Baldwin for the Southern Railway in 1907. When I arrived the fire was already warming the water as the engine sat inside the shed under the smoke hood. Several hours are necessary to bring the boiler to operating pressure, so there was time to meet some of the volunteers, and wander about taking pictures of the equipment. 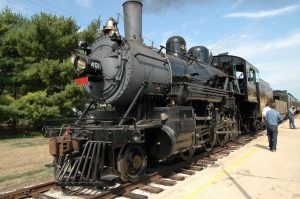 After awhile it was getting close to moving the engine outside, so I set up two video cameras, one outside the shed for an external view, and the other one on the deck of a Milwaukee Road NW-2 which was parked ahead of 401 inside the building. Tape rolling, the beautiful engine began backing up, and the EMD mounted camera produced a beautiful image as the headlight came on while the locomotive moved out.

Outside, a few more moves coupled the locomotive to the train and switched tracks for a backup move to the Nelson Crossing depot on the museum grounds. This depot was donated and moved to the museum in 1977 from its original site on the Illinois Central in Deland, Illinois. It serves as one of two boarding locations for the train ride as well as a gift shop.

To reach this depot from  the engine house, the train backs past it on the far side of the parking lot, then switches to the station track, which is now the only portion of the Illinois Terminal Railroad in revenue service. Leaving the station, the train once again reverses to the connection to the old Illinois Central track.

Once on the mainline, the train passes the main yard area of the museum grounds, then  proceeds toward a bridge over the Sangamon River,  which was pretty dry when we were there. Once past the bridge the train picks up some speed as it covers the rural and urban terrain to reach downtown Monticello.

The Monticello depot is a former Wabash structure built in 1899. The depot has been moved twice, first in 1904 when the Wabash line was moved and straightened, and again in 1987 to its present location. It now serves as the second boarding location for the train ride. 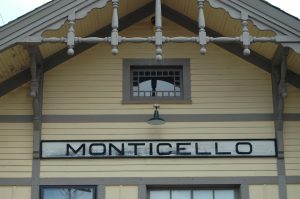 Once the train reaches the downtown depot, there is a short layover, allowing passengers to get off and take photos and visit with the crew. The train then makes a reverse move through town, across the river, past the Monticello Railway Museum site, and continues almost to the town of White Heath. From there, it moves forward and switches to the Nelson Crossing Depot track, where the trip concludes.

I was invited for a cab ride. Since the locomotive is oil fired, the cab is remarkably clean. Getting cab ride video is always challenging because of the brightness of the windows and the generally dark interiors. In a smaller cab such as 401’s, it is even more difficult. Add in the jointed rail and the general vibration of a steam locomotive, and, well, it is what it is, but always a great experience. 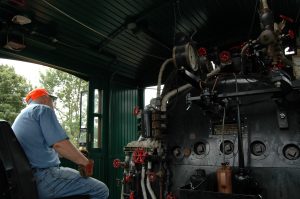 Overall I really enjoyed my visit to the Monticello Railway Museum. All the volunteers were friendly and helpful, and very enthused about what they were doing. The grounds looked well maintained, and aside from some of the equipment that had really been outdoors a long time, most of what I saw appeared to be in at least cosmetically good shape. I liked seeing the new construction, especially on such a grand scale.

Southern 401 is great looking locomotive. The restoration was worth it. We owe the folks who made it happen a great deal of thanks! The Monticello Railway Museum is always looking for new members, volunteers and contributors to carry on the mission.

Please, put Monticello Railway Museum on your list. Even if 401 isn’t running when you visit, I think you will find much to see and enjoy here. My time was pretty consumed with 401, and I regret not allowing an extra day to explore all the other equipment available at this fine museum.

Our trip to the Monticello Railway Museum is documented in our program Steam at Monticello, which is one of the chapters on the DVD Steamin’ Summer Volume 3. 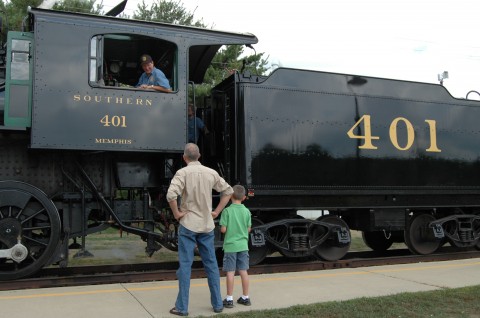 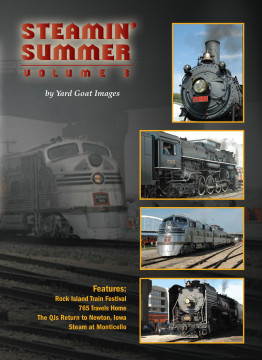