Mount Rainier Scenic Railroad operates over former Milwaukee Road tracks in the shadow of the majestic volcanic mountain. Visitors board trains at the depot in the hamlet of Elbe, Washington for the seven mile trip to Mineral, where the railroad has an extensive yard and shop.

An overview of the Mount Rainier Scenic Railroad

Mount Rainier Scenic Railroad is a non profit operation run mostly by volunteers. Its collection of geared logging style locomotives from each of the major builders: Climax, Heisler, Shay, and Willamette is well known and respected. The railroad’s Willamette is the only operational example in the world. These logging engines were built for the steep  grades and tight curves typical in the forest industries. 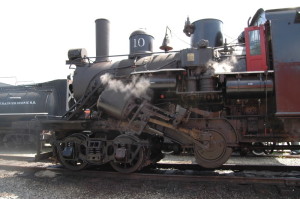 In addition to the logging engines, the railroad has several conventional rod-style steam  locomotives and a couple of diesels in operation. An even greater number of heritage steam and diesel locomotives are in the collection but not currently operational.

The normal operation is over a circuitous line between the small mountain town of Elbe and the even smaller village of Mineral, however they occasionally run special trains all the way to Tacoma. The tracks used by Mount Rainier Scenic Railroad are actually part of the extensive rail network owned by the City of Tacoma. The city operates commuter services as well as freight traffic serving the region’s port and manufacturing industries. The museum has long-term arrangements with Tacoma Rail for using the Elbe – Mineral portion of the line.

We visited this working railroad museum twice in June, 2011, just a few days apart. Our first visit was on a sunny day. I was expecting the normal operating schedule and was surprised to find out my visit happened to coincide with a charter by some German railfans. They had arranged for two steam locomotives and a string of empty log cars to operate with several photo runbys. A few days later we were present for the 2011 National Railway Historical Society convention, which included some rare mileage on a portion of the Tacoma Hill line and some fickle Washington State summer weather. On both days we were free to safely look around the expansive yard and shop facilities at Mineral.

The log car train was interesting on several levels. West Fork Logging Heisler #91 brought the empty cars and a caboose to Elbe, and proceeded to switch the train so the caboose would be on the rear as it returned to Elbe. Meanwhile, Hillcrest Lumber Climax #10 traveled light from Mineral. At Elbe, #10 took charge and headed toward Mineral. Just after leaving, a problem developed with one of the cars, so #91 hooked on to the rear and pulled  the train back to Elbe, followed by #10. The problem was quickly resolved and the train was on its way again.

Six days later, the Mount Rainier Scenic Railroad NRHS convention trip took place. My wife, Jan, now joined me in covering this event. As the train arrived from Eatonville the skies opened up. It rained off and on the rest of the day.

The star of the NHRS trip was newly restored Rainier #2, built by Willamette. While not much for speed, the engine put on a fine performance to the delight of everyone. There was plenty of time to explore the shops and yard at Mineral. The Mount Rainier Scenic Railroad volunteers moved some other equipment around, which was a nice bonus.

If you visit Mount Rainier Scenic Railroad, the line between Elbe and Mineral has limited accessibility. At Elbe there is a small yard near the depot where the trains compete with the nearby highway and logging trucks, and a large parking area shared by the railroad, the historic Little White Church, and nearby businesses. After leaving Elbe there are spots along a short distance of State Route 706/National Park Highway to pull off to watch the trains. Further along, the line goes away from all road access until it veers south and crosses the highway near park Junction Road. After this point it is largely going through private land until it reaches Mineral.

There is much here to see and do. The Mount Rainier Scenic Railroad is well run and offers a variety of experiences for rail enthusiasts and the general public. It is is easily accessible from the Seattle-Tacoma area. The Mount Rainier Scenic Railroad website  has a great deal of information about the equipment, area attractions, and even current weather conditions and forecasts.

Visit – you will love this place!