NKP 765 made her way from East Peoria, IL to Logansport, IN on the day following the Rock Island Train Festival. It traveled on the Toledo, Peoria & Western (TPW), a short line owned by RailAmerica.

The evening before, shortly after the festival closed, NKP 765 headed out of town to East Peoria where it would spend the night.  I chose to spend the evening at the Rock Island rail yard as the Iowa Interstate QJs were making up their train for what would be a high speed run across Iowa to their home base in Newton. (Videographer Mark Paulson followed the QJs and that program is also featured on the Steamin’ Summer Volume 3 DVD).

On Monday morning I awoke early, gobbled the free breakfast at the motel and checked out. Not knowing exactly what time NKP 765 would leave East Peoria, I stopped at the yard first to confirm she had left. Turned out she had left really early, and it was about 100 miles later that I caught up with the train near Watseka, Illinois.

It was another hot day but cooler than the westbound trip the previous week, so the TPW did not have any heat-related speed restrictions. Due to the general condition of the track, there were a few spots where the speed was low, but overall the engine was able to move along at a reasonable pace, which made for a more interesting chase. There were quite a few chasers, but it was a weekday, and possibly the previous four days of high speed chases to Bureau, Illinois and Iowa City, Iowa was enough to satisfy many would be participants today.

The day was spectacular in terms of good light, and despite the heat, it didn’t seem nearly as bad as some of the previous days. Maybe I was toughening up.

Most of this line was new territory to me, and we passed through some beautiful areas, especially as we we were getting nearer to Logansport.

Arriving in Logansport brought out the crowds of local folks, many of whom had the chance to see the locomotive the previous week as it traveled west. As the engine was serviced on the TPW, a large crowd gathered in the late afternoon sun to see and be seen. As I finished up with video and photos, I realized my 11 day steam odyssey (Little River Railroad, Silver Creek & Stephenson Railroad, and the Rock Island Train Festival) had just come to end. 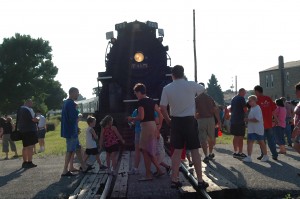 After both celebrating and lamenting this milestone at Mr. Happy Burger, I departed Logansport for 10 more hours behind the wheel.

As I headed north and west, I thought about my great day accompanying NKP 765. I also thought about the crews who had ferried the engine to and from Rock Island, plus all those who helped service the engine at the Rock Island Train Festival. My mind wandered further on that long trip, thinking about all the volunteers who had helped restore NKP 765, and the people who contributed money for that effort. Plus all the ongoing work and expenses required to keep NKP 765 active.

For those of us who enjoy the sights, sounds, and smells of steam locomotives, we owe these people a great deal of thanks. I hope you will consider donating or becoming a member of the Fort  Wayne Railroad Historical Society. You will be helping keep NKP 765 running now and in the years ahead.

You can see a preview of this historic trip here. Please visit Yard Goat Images website to learn more about the Steamin’ Summer DVD series. 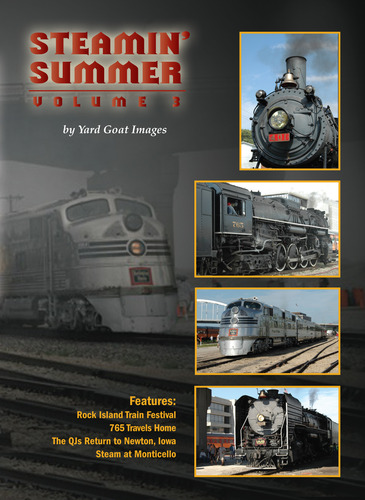