The Roaring Camp and Big Trees Narrow-Gauge Railroad is a family operated tourist railroad in Felton, California. The railroad runs on steep grades through a canopy of giant redwood trees for three and a quarter miles, to the top of Bear Mountain. Because of the difficult grades, the Roaring Camp & Big Trees Narrow-Gauge Railroad stables some fine examples of geared Shay, Heisler, and Climax locomotives. Geared locomotives were designed for logging operations because they had sufficient tractive power and ability to perform on steep grades and sharper turning radius than standard “rod” steam locomotives.

F. Norman Clark began operating the railroad in 1963, on a 170 acre portion of the Big Trees Ranch. Big Trees Ranch was founded in 1867 by Joseph Warren Welsh in order to preserve a large area of the virgin redwood forest from logging. In the spirit of preserving the redwoods, the railroad was constructed in such a way that as few trees as possible would have to be cut.

Mr. Clark found his first locomotive Dixiana abandoned in the Appalachian Mountains in 1958. The two-truck Shay was constructed by Lima Locomotive Works  in 1912. It began its career with the Alaculsy Lumber Company and later worked at the Smoky Mountain Railroad in Tennessee. It is named for a small-narrow gauge mining railroad in Dixiana, Virginia. Just five years later Dixiana had been restored and brought back to life, pulling its first revenue train in April, 1963.

Over the years Roaring Camp Narrow-Gauge Railroad acquired and restored many other steam locomotives, two of which still operate in regular service here:

Toulumne is a two-truck Heisler locomotive built by Stearns Manufacturing Company in 1899 for the Hetch Hetchy Valley & Yosemite Railway and used at West Side Lumber Company at Toulumne, California. Sonora is a three-truck Shay (Lima) built in 1911 as West Side Lumber #7. 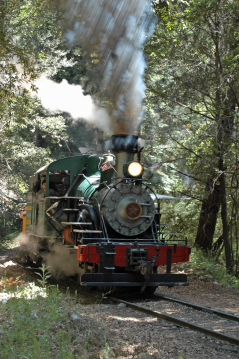 The Roaring Camp & Big Trees has done an impressive engineering job to create this mountain railroad with grades of over 9%. There are switchbacks, wooden trestles, and tight curves – just what would be found on a typical logging railroad.

We visited Roaring Camp and Big Trees during the annual Civil War encampment, which brings thousands of visitors to the site. Because of the large crowds, the railroad operated all trains in two sections during our visit.

We arrived early in the morning to get a look at Dixiana and Toulumne being readied for the day at the rustic engine house. The building is built with a wood exterior and a corrugated metal roof. It would look at home at any backwoods logging railroad. 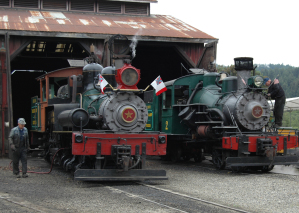 There were a number of people at work filling the sand domes, polishing, and oiling. Soon the locomotives were ready to go and one by one moved down the track to a switch, then backed to the passenger cars parked alongside the engine house.

After backing down to the Roaring Camp station, the engines posed side by side for photo opportunities and a little more polishing.

To understand how the trains operate here at Roaring Camp & Big Trees, this map will be helpful. The trains departed the station about 10 minutes apart for the climb to the top of the mountain.

I found it interesting that despite the rugged terrain and steep grades surrounded by giant redwood trees, the railroad is very accessible on foot. I had no difficulty getting to nearly all parts of the railroad while carrying all my camera equipment. In fact, there are actual trails open to the public for hiking and mountain biking. Wear good footwear and sensible clothing for this rugged hiking, and be very careful near the tracks.

It was also pretty interesting to see the Civil War reenactors. 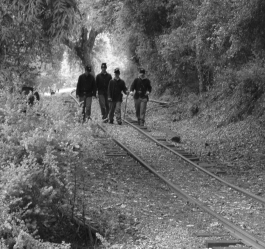 There were rows of white tents, equipment, and war materials. Men, women and children in authentic clothing went about their business, eating, washing clothes, attending church service, etc. Later in the day there were battle reenactments with lots of big and small explosions. 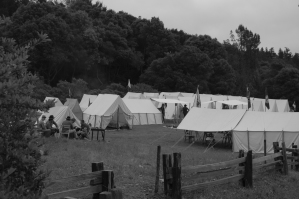 It was a grand day with great video opportunities!

The folks here run a terrific operation. They have rescued, restored and operate some fine examples of geared logging locomotives. They deserve your support. I hope you will plan a visit soon to Roaring Camp & Big Trees Narrow Gauge Railroad!

Our program features Shay #1 and Heisler #2 heading the trains, plus Plymouth #40 acting as a rear-end pusher throughout our visit. The nearly 30 minute-long program about our visit to Roaring Camp & Big Trees Railroad can be found on the California Steam Stories DVD from Yard Goat Images. It is one of three programs on the DVD. Other features are visits to the Billy Jones Railroad, which is a Grand Scale operation in Los Gatos, and to the renowned Railtown 1897 State Historic Park where we see Sierra #3 in action. Watch a preview of California Steam Stories here. 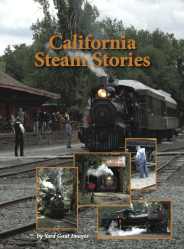