The Rock Island Train Festival was the country’s biggest railroading event during the hot summer of 2011. The four-day event was held along the Mississippi Riverfront in downtown Rock Island, IL on park land and the adjacent rail yards. 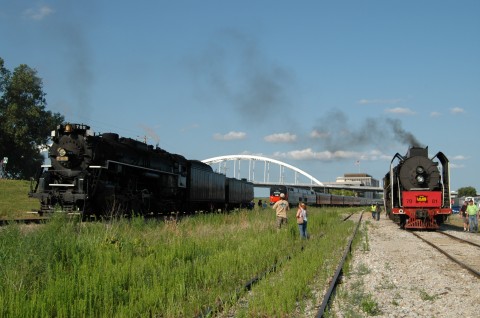 Among the highlights of the Rock Island Train Festival were seven steam locomotives: QJs 6988 and 7081 from Iowa Interstate Railroad (IAIS), NKP #765 from Fort Wayne Railroad Historical Society, Flagg Coal #75 and Lehigh Valley Coal #126 from Gramling Locomotive, and privately owned Viscose #6 and Leviathan #63. The Illinois Railway Museum  arrived with the streamlined Nebraska Zephyr train-set with its stainless steel-clad E5 #9911-A plus two classic diesels from their collection. In addition, modern equipment was on hand from Iowa Interstate, BNSF, and Iowa, Chicago & Eastern. Amtrak sent two units painted in Heritage 1 and Heritage 2 paint schemes to mark their 40th anniversary.

Two daily round trips from the Rock Island Train Festival to Walcott, IA over the famous Government  (Arsenal) Bridge  led by one of the big steam locomotives brought many opportunities to ride and railfan in both urban and rural settings. There were also day-long trips, notably to Bureau Junction, IL, one led by #765 and the other with the the Nebraska Zephyr. A third trip led by newly “Americanized” QJ 6988 to Iowa City was also popular. All trips during the Rock Island Train Festival were sold out in advance. On the Festival grounds there were equipment displays, vendors, food, children’s activities, and a live-steam demonstration.

Getting to and from the Rock Island Train Festival

The Rock Island Train Festival offered significant opportunities for viewing steam railroading including the ferry moves to and from the Rock Island Train Festival by the large locomotives. The QJs came from Newton, IA as a double-header, first hauling a passenger consist to Iowa City, then a record setting freight train to Rock Island. After the Festival the QJs completed the trip to Newton during a one-day fast paced jaunt to Newton with the tool and water cars, two IAIS business cars, and a short freight train.

To reach the Rock Island Train Festival, 765 started out near North Judson, IN where it had served earlier in the summer at the Hoosier Valley Railroad Museum . It took a somewhat convoluted route to get to Logansport, IN where it reached the Toledo, Peoria & Western (TP&W)  for it’s straight shot west to East Peoria to gain IAIS tracks. It was on the TP&W when the excessive heat caused the railroad to limit the speed to about 10 miles per hour, then finally halted all traffic on the entire railroad as the temperature climbed above 100 F. The locomotive continued its trip after sundown and arrived at East Peoria in the wee hours, then pressed on to Rock Island. After the Festival, #765 made a much speedier trip back to Logansport.

The Rock Island Train Festival itself was a joy. The site was excellent,  spreading out along the river in downtown Rock Island. It was across the street from downtown businesses and restaurants, with plenty of low cost or free parking. The displays were arranged for easy access plus there were vantage points for a wider view from Centennial Bridge over the rail yard, or from the Great River Trail on top of the levee.

The only negative was the record-breaking heatwave that descended upon the Midwest, plus some wild thunderstorms. But, it’s July, and those things happen. Bravo to the volunteers and especially the steam engine crews for carrying on in the face of heat-related discomfort. 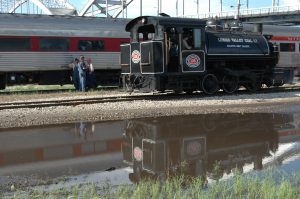 Despite the overall success of the Rock Island Train Festival, apparently the promoters did not meet their expectations, and some creditors were left without being paid. Although the parties are worked to reach agreements, it does put a large cloud over future events such as this. It’s been reported that other such festivals in recent years have had marginal or no profits as well, so we will all need to hold our collective breath that it does not mean an end to ambitious events of this kind.

Our video record of the Rock Island Train Festival, including the excursions, and the locomotive ferry moves can be found on our DVDs Steamin’ Summer Volumes 2 & 3. If you were there, maybe you’ll see yourself! And if you weren’t able to make the event, here is your best chance to see what you missed. If you really want to give yourself a treat to include the Little River Railroad Celebration the week before with five steam locomotives, order all three volumes of Steamin’ Summer! Also included on the 3-DVD set are stories about the Monticello Railway Museum and the Silver Creek & Stephenson Railroad. 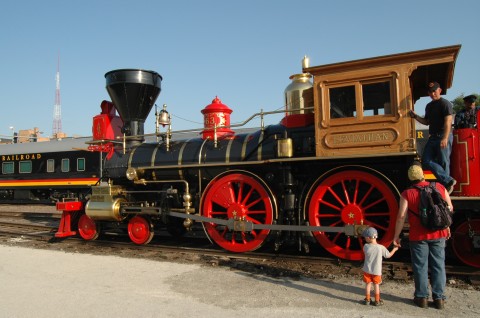 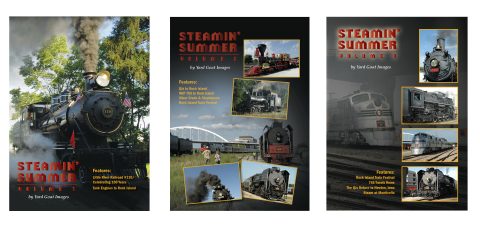