SP 4449 was probably viewed as the premier highlight of the NRHS 2011 Convention by many of the delegates. The convention was headquartered in Tacoma, WA, and had many options for NRHS members to experience steam railroading. Besides three unique trips with SP 4449, attendees could choose riding behind Cowlitz, Chehalis & Cascade #15 at the Chehalis-Centralia Railroad and Rayonier #2, a geared Willamette locomotive at Mount Rainier Scenic Railroad. 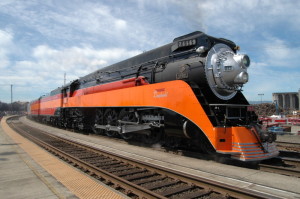 SP 4449 is a handsome 4-8-4  “Northern” type locomotive built in 1941 by Lima Locomotive Works. The engine is equipped with 80” diameter drivers and capable of 100 mile per hour operation.

During its glory days, SP 4449 was one of the locomotives assigned to pull the Southern Pacific “Daylight” passenger trains linking Los Angeles and San Francisco along the scenic coast route and then on to Portland. SP 4449 operated until 1955, when it retired and  put on display at a Portland city park. Its second life began in 1974 when it was selected to pull the American Freedom Train throughout the United States. Today, SP 4449 is the last operating “streamlined” steam locomotive in North America. The locomotive is owned by the city of Portland and operated by the all-volunteer Friends of SP 4449.

Convention goers had three opportunities to ride behind SP 4449. The first trip began in Portland and brought delegates on a fast ride to the host city of Tacoma. Riders had the option to ride one way from Tacoma to Portland on one of Amtrak’s frequent Cascades trains, and return with SP 4449‘s train. This rail route is owned by BNSF.

The next trip, near the end of the convention, was a rare mileage event on BNSF freight trackage. This excursion began near sea level at the Tacoma Amtrak station and headed east over Stampede Pass at 3672 feet above sea level. After passing through 9844 foot long Cascade Tunnel, the trip ended at Easton, Washington, where the engines were wyed for the return trip.

The following day, SP 4449 led the train and its passengers on its third trip, returning to Portland along the same BNSF/Amtrak route.

My wife Jan accompanied me on the Washington portion of my June and July journey, which also took me to three steam sites in British Columbia. The day before the first SP 4449 trip from Portland to Tacoma, we scouted the route to find possible locations for video coverage. Knowing this was likely going to be very fast trip we were conservative in picking locations. We decided to start our coverage in Vancouver, Washington for two major reasons: we would be able to capture SP 4449 coming across the Columbia River from two different locations, and it would be quicker to get on I-5 than from Portland.

We got up early the next morning and drove to Vancouver from our Tacoma hotel. Jan’s location was along the Columbia between the I-5 and the BNSF bridge, while I staked out the long curved platform at the Vancouver Amtrak station. All went according to plan. Jan had the car and picked me up at the station after the train had cleared the bridge. Rather than wait for it to leave, we headed to our next location which was at Castle Rock. We arrived to capture the Coast Starlight going south, then SP 4449 roared through in the other direction.

Back on the highway, we made it to Centralia as the train was bearing down on the town. Jan stopped the car and I grabbed my camera and ran to the spot I had chosen the day before. Unfortunately there was a disorganized crowd there now and I barely had time to get the camera going when SP 4449 raced into view. I got a good shot as it was coming toward me but could not get it as it passed my position due to the many people in the way. Fortunately, Jan had gotten out of the car and was able to shoot several still photos as it passed. This was an interesting segment to edit!

Our next goal was to reach the Tacoma Amtrak station before SP 4449 did, which almost worked out. As we drove up the train was gliding to a stop and there was so much traffic we couldn’t get close. So we found parking a couple of blocks away and tried to get some station platform shots, but security officers were directing everyone out of the area.

Later that week we scouted locations for the Stampede Pass trip. Again, we were conservative, knowing there are few nearby highways parallel to this mountainous rail line. We found two locations west of Auburn where we could each get separate decent shots close enough to drop one of us off and pick up after the special passed. We also tried to find back roads along the line but much of this area is off limits due to security around a large municipal water reservoir. We would probably be pushing the envelope on our rental car agreement too, as some of the roads we discovered were pretty rugged. We did find the road to the tunnel but determined we would spend too much time getting there and back again for the shot. If I had it to do over again, we would rent a second vehicle for the day to give us more opportunities.

We met SP 4449 and the train at Easton, where it spent a lot of time discharging passengers, turning the engines on the wye, doing a spectacular runby, loading the passengers and servicing the locomotive. We split up on foot to get different angles of the action, which worked great at this large open location. While the passengers got back on the train, Jan drove me to a spot west of Easton on Cabin Creek Road we had scoped out on our surveillance trip. Then she drove back to the yard to shoot the train departure before retrieving me.

We raced back to Kanaskat where Jan got the train going over the Green River Bridge and I went to the same crossing as my morning shot. Then we drove to the Tacoma station just in case the train was delayed. It wasn’t.

The following morning was the third trip, Tacoma to Portland. Jan took her position on the pedestrian bridge at the wonderful Museum of Glass, which delivered a nice view of SP 4449 leading its train around a broad bend right after departing the Amtrak station. I set up about a half mile further down the line to catch the train going under Jan’s bridge toward me. The light that morning was bright and spectacular as we caught the train going through an urban landscape of railroad tracks, freeways and buildings.

The next stop was Centralia, where we found the train stopped but ready to go….now! This was good catch for both video and audio as SP 4449 started out.

Back on the road, we headed straight to Portland Union Station to the two spots we had decided on earlier that week. Jan was on another pedestrian bridge over the station tracks while I set up at ground level with a view of the arrival location. Looking good! There was an Amtrak train but it seemed to be back far enough that I should get a good view of SP 4449 as she pulled in. Jan would have a clear shot as well.

Soon we heard a slow chuffing sound as the train approached…..very….slowly. Then it stopped….behind the Amtrak train. There went my shot. Jan’s was not much better, as SP 4449 came to rest in the dark shade of the train shed. Oh well!

In spite of a somewhat quiet finale, SP 4449 put on a great show for all three trips. This locomotive has become an American railroading icon, and deservedly so. The unique styling and colors given to SP 4449 and its brothers set them apart from other streamlined steam locomotives. SP 4449 became the only one of 26 Southern Pacific GS-4 class to survive the scrapper’s torch. After being stuffed, mounted, and neglected in a city park, it got its second chance to run; a chance few other locomotives get. And not just run anywhere! It was restored to pull the American Freedom Train to celebrate the county’s Bicentennial. After being seen and photographed by millions, there is probably no way this locomotive will ever end up in a park again.

You can see the video story of the three NRHS convention trips we took with SP 4449 on our DVD, Steamin’ Through The Seasons. I know you will enjoy owning this DVD for yourself or buy it as a gift for someone special!