I hate to sound like a broken record about the days we worked on the Steamin’ Summer DVDs, but one of the hottest, most unbearable days I’ve ever experienced was the day I attempted to follow NKP 765 Travel to the Rock Island Train Festival across Indiana and Illinois. I say attempted because Mother Nature put a temporary end to the locomotive’s journey just short of the Illinois border.

My day started in northern Indiana where I was getting footage of the three tank engines (Flagg Coal 75, Lehigh Valley Coal 126, and Viscose 6) in their truck convoy to Rock Island. The convoy started late because of a problem with one of the rigs before they left Coldwater, Michigan, the home of Little River Railroad. I was hanging out in LaGrange, Indiana for quite awhile to record the trucks passing through town. John Gramling, owner of 75 and 126, was advising me of progress by cellphone.

I caught them when they finally passed through LaGrange, then I was able to get ahead to get a freeway shot near South Bend. Because of the late hour and the probability of getting caught in Chicago sprawl before I would get ahead of the convoy again, I decided to break it off to see NKP 765 Travel to the Rock Island Train Festival.

Catching up with NKP 765

I headed southwest and finally caught up to NKP 765 as she was approaching Goodland, Indiana. I had been cool and comfortable in the car for some quite awhile by the time I saw the smoke on the horizon, and was surprised to catch up so quickly. When I got a visual, I could see why, as NKP 765 was CREEPING along very slowly due to slow orders, which I been just made aware of having heard it on the scanner. The Toledo, Peoria & Western (TPW) was justifiably concerned about heat kinks in the tracks.

So I opened the car door and and faced the miserable heat and humidity, got my shots, re-stowed my gear, then headed up the road to get ahead again. Usually when you follow a locomotive of NKP 765’s caliber, that might mean you will be lucky to get ahead in 30 minutes or more, but today it was only a few moments as the engine and a caravan of chasers oozed down the soft pavement on that miserable day. There was no problem getting several more shots before the train was halted by the dispatcher. In fact, the entire TPW was told to stop all train movements, until later that evening. 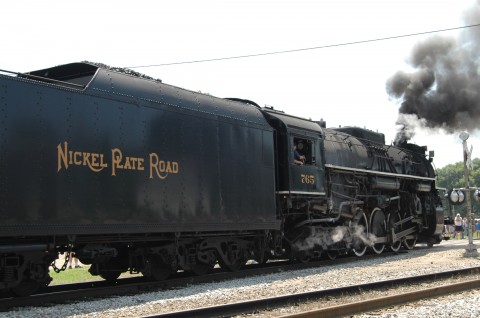 NKP 765 and the train stopped beside Highway 24 in front of a farm house. Soon there were cars and trucks parked along the road, and the front yard of the house was full of people, mainly because of several nice shade trees. The family was there too, and they even offered chairs and refreshments to their unexpected guests! Nice folks!

So I captured some footage and photos of the stalled train there on a hot Indiana afternoon, and felt very sorry for NKP 765’s engine crew in their heavy clothes, now with no breeze coming in through the cab windows. Still, they seemed happy to allow some youngsters to climb up for a look inside the fiery hot beast.

NKP 765 makes it to the Rock Island Train Festival

Since there was no hope of getting any more daylight footage of the trip, I decided to head to my final destination of the day, Rockford, Illinois. On the way there I stopped at the TPW yard in East Peoria, where 765 was to have spent the night. When I arrived, sirens were sounding because a tornado had just been spotted very near the yard. In fact the security guard pointed to some trees on the edge of the yard as the place he had seen the tornado just moments before my arrival. Fortunately the funnel never touched the ground, nor did any damage in the area.

Late in the evening, NKP 765 was given clearance to complete its trip to East Peoria, IL, where it arrived before sunrise. It completed its trip over the Iowa Interstate (IAIS) Railroad and arrived at Rock Island later that day, while I was covering the photo special at the Silver Creek & Stephenson. Had it not been for the hot weather, we would have been able to follow NKP 765’s trip over much of this route the day before.

So, a lot of miles, a lot of sweat, some good footage even if not as much or as stirring as I had hoped for. Met a lot of nice people on this day, and the experience gave me some new appreciation for the hard work of a steam locomotive crew. Remember, the folks in charge of maintaining and operating this locomotive are all volunteers. Their pay is the experience, and the smiles from the lucky ones to see the engine in steam. Today they really earned their “pay”!

Thank you! Thanks to all volunteers! 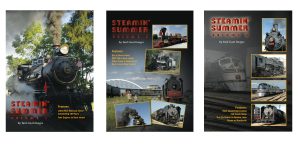